It's May the Fourth aka Star Wars Day⁠—the most important internet holiday in the GALAXY! You might be aware that we have quite the abundance of Star Wars fans in the studio. Just take a peek at our fan art from previous years to get an idea! (Star Wars Day Fan Art Gallery 1 and Gallery 2).

This year, we're delighted to have something very special to share with you—'The Fair Trade: A Star Wars Fan Film', an ambitious lockdown passion project from our very own Dublin studio CG Supervisor, Marty Sliwinski.

Marty created the short film with the help of some of his colleagues, as part of an extracurricular project during the pandemic lockdowns. What started off as a learning project became a beautiful fan film inspired by the Star Wars universe. 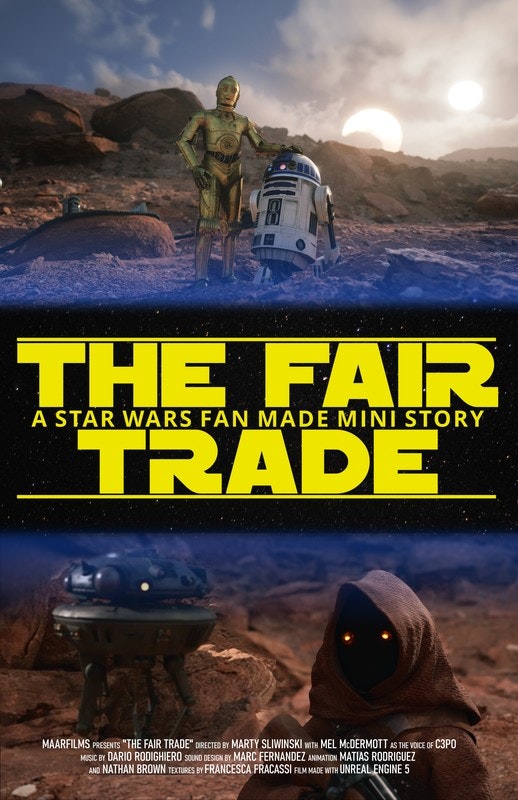 A nostalgic trip to the classic 77's STAR WARS feel. Shortly after the events of A NEW HOPE, R2-D2 and C-3PO must return to TATOOINE to locate an Imperial artifact for Luke Skywalker, while the Jawas and the Empire are lurking nearby…

The film was created in Unreal Engine 5, using Lumen and Nanite.

We asked Marty to tell us a little bit about his passion project and share some of his advice for creating a short. Check out what he had to say below:

How did this short film come about?

Marty Sliwinski: The film started as a learning project. I jumped into Unreal Engine 5, excited about new possibilities brought by Lumen - the new lighting system, and Nanite - the way to stream the meshes that saves usage of the computer resources.

When I downloaded the Valley of the Ancient, I thought it looks a lot like Tatooine from Star Wars and how I wish I could see how our beloved C-3PO and R2-D2 would look in there. And that's how it started. Then from shot to shot, the script came along, and the Star Wars story emerged, growing to become a full fan film, when a wonderful bunch of talented people joined and put so much love and work in it!

Are you a big Star Wars fan?

I think I am. Not the cosplay making, convention going type of fan (those guys and gals are really amazing!), but nevertheless this universe influenced me on a very deep level. It was love at first sight ever since I saw The Empire Strikes Back in the theater a long, long time ago.

Being a fan of anything is a very personal thing. Creating a fiction based on this is even more so. It's all about what made you love whatever you're a fan of. What I love about Star Wars is the way the original trilogy made me feel. There are many things to this universe. Being on board the Millennium Falcon, walking down the street of Mos Eisley, driving the landspeeder, watching arguing droids, just to name a few, and all this accompanied by the amazing score from John Williams—it all creates a unique atmosphere, which simply stuck with me, well, I think, forever.

It's really hard to say. The entire original trilogy, that's for sure. And the characters? I think each of the original trilogy bunch speaks to me in one way or another. I think that's the key to a great character—that you can find something in you that relates to them. And this is a real phenomenon—a whole ensemble that you can relate to. That's the true genius of Mr. Lucas and the reason so many people are pulled into the world he created.

Your short was created during the lockdowns in 2021! How did you get support from your colleagues when you started your project? And how many people were involved throughout?

We live in a world with so many wonderful people in it! And I can't thank enough, all my friends who decided to join me in this journey! This film would never be possible and it wouldn't be what it is, if it wasn't for this fantastic, super talented and generous bunch.

I think the lockdown helped a little, giving people a bit more time to spend on their passion projects. When I started getting the first satisfying images from what was a learning curve at the time, I shared them with a whole lot of my friends, out of pure excitement. I think I got the project known amongst the group, especially people from work, before it even turned into a film. But that became a pitch bible of sort. I didn't want to involve anyone too early, to not get people discouraged by the lack of visible progress. I made that mistake before and it didn't work out very well. So I kept working on my own collecting assets and setting up the master shots, until I reached the point I was certain we could move from fairly fast. Only then I started reaching out to people to see if they were interested. Of course I knew everyone was busy, both with work and personal life, but I thought it wouldn't hurt to ask.

To my surprise and joy, almost every person I reached out to said YES!!! I simply couldn't believe it! I was over the moon, over the entire galaxy far, far away! Soon after, our little team grew to 9 people, working full throttle to complete the film.

How long did the project take to complete? And what kind of workflow did you use?

It's hard to judge the exact amount of time, honestly, because we could only work in our downtime, when possible, and mostly on weekends. And not all of them either. The project also came to life spontaneously, gradually shifting from learning experience to being a film.

The entire idea started at the end of May 2021, when Epic Games released Unreal Engine 5 Early Access. At that time I only wanted to see what the new, ground-breaking features could actually do. I started making random shots. The set I downloaded from Epic Marketplace felt so much like Star Wars that it was only natural to put the Star Wars characters in there. The shots were very satisfying and I finally thought, I could make an entire film!

I didn't want to build the whole lot of assets myself, especially since the Star Wars related models made by enthusiastic fans can easily be found on the internet, so I started looking. It quickly turned out that not all of them would fit the needs of the film, so I started doing some modifications. A bit of kit bashing, buying parts for the assets, a little modeling. The C-3PO model was the most difficult one. I couldn't find a model which had enough detail. After a long time spent searching, I found model parts made for 3D printing. Not exactly what I was looking for, but I thought, let's give it a shot. It would also be a test for how much Unreal Engine could handle. And guess what? It worked!

That was around the first half of August and I already had the first draft of the script. Having all the assets collected I decided to focus on script for a while and started reaching out to the people around me to see if they would want to join.

From this point, everything started to go really fast. Recording VO, creation of SFX, changes to the script, building the shots, animation, texturing, final modeling, all came together in a form of completely non-linear workflow, which was a shift from the way we were used to working. We could replace the assets in the late stages of production, re-create animation parts, adjust the look of the assets on set to make them fit better in the shot, and the order of those changes wasn't important. It all worked together. Even almost at the very end, I decided to remodel the Jawas, because I only had one model at first and I wanted each of them to be different. That also fit seamlessly into the workflow. Finally the film was released on the 25th of October, so the entire process took about 6 months of weekends and afternoons.

What did you learn from working on this project?

Lots of little things I didn't even realize when I was in the middle of it. Unreal Engine is an amazing tool and I gained not very in-depth, but very broad knowledge, about many aspects of working with it.

I learned that the non-linear workflow I've always loved is not only possible, but most beneficial to the creative process. I also think I learned a bit about how to lead a project like this.

But most of all, I learned how much I still need to learn.

What was your favourite part of working on this project?

Actually, I enjoyed every single stage, but I think the most satisfying was when we had the film almost done, all was coming together nicely, and we simply tweaked each sequence to make it even better. Any details that were missed during the original process were adjusted and given a final polish.

What was the most challenging aspect of completing this short?

I think figuring out from scratch the details about how the Engine works and how you can use it to your advantage. But it was also a lot of fun.

Looking for the assets was also a challenge.

Unreal Engine is an environment that blends those two aspects together. Creative process is all about iterations and Unreal Engine lets those iterations be very quick and effective. It can be used very efficiently to produce great quality films in much shorter time.

What advice do you have for someone creating a CG short film?

Don't stop believing in the project. Even in the moments of doubt. Especially when it's self doubt. Commit to it, and believe that it's worth finishing. Because it is! Every single film that is completed and released is a success.