Safety goggles and party hats on! The nominations for the 2022 BAFTA Children & Young People Awards are here, and we’re pleased to share that Ada Twist, Scientist has been nominated in the Content for Change category. Introduced in 2018, this is a category that recognizes series creating positive change, and that deliver messages about learning and/or social issues at the core of their content. 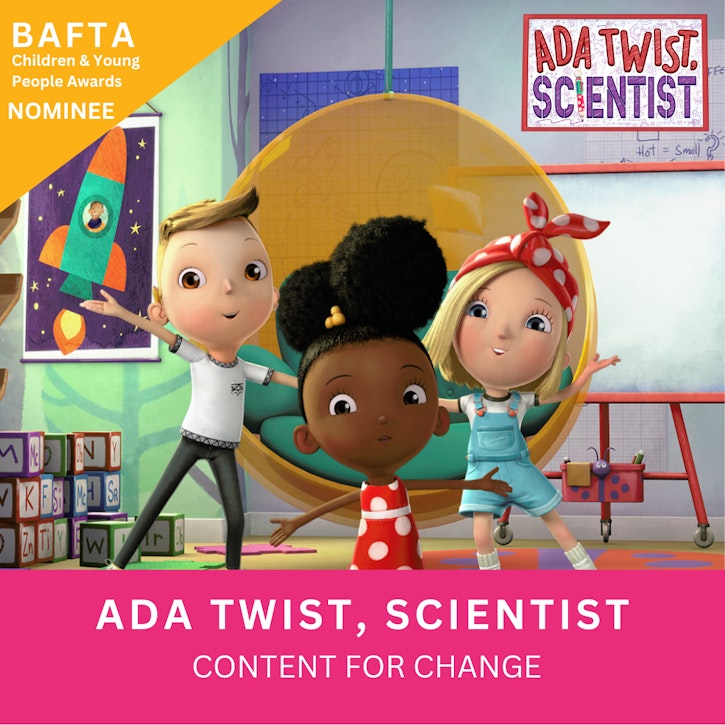 Ada Twist, Scientist is a series that follows the story of Ada Twist, a young scientist who encounters new problems and discoveries with her friends, Rosie Revere, Engineer and Iggy Peck, Architect. Together this trio uses the powers of science and engineering to hypothesize their way to new solutions, learning things about the world along the way!

The series is based on the best-selling children’s books by Andrea Beaty and illustrated by David Roberts, and was developed by executive producer Chris Nee (Laughing Wild), Wonder Worldwide, and produced in partnership with President Barack Obama and Michelle Obama’s Higher Ground Productions, with animation done here in our Brown Bag Films Dublin studio.

Ada Twist, Scientist has been recognized alongside El Deafo, Only A Child, and Waffles + Mochi in the Content for Change category. We are thrilled to be among such great company, creating change in children’s content.

The BAFTA award winners will be announced during the ceremony at Old Billingsgate in London on November 27th. To view the full list of nominees, please click here.

Congratulations to the entire Ada Twist team and to our partners at Netflix, Chris Nee (Laughing Wild), Wonder Worldwide, and President Barack Obama and Michelle Obama’s Higher Ground Productions on this incredible nomination. And a huge shout out to all the 2022 BAFTA Children & Young Peoples Award nominees.