Looking to brush up on your modelling, texturing and lighting skills? We've got you covered with this #tutorial by Senior Character Artist Darko Mitev, who's based in our Dublin studio.

We caught up with Darko who walked us through the process on his latest character “Ragnar”!

Darko: In this tutorial, we will look at the making of one of my latest images called Ragnar.

He is a superhero. He got his powers as part of genetic experimentation. Ragnar developed physical mutations on his body. The green crystal-like structure that grows on his body gives him great strength and stamina. His sword, specially designed for him by Chloe, serves as a catalyst for his power. When he uses it, he can transfer the energy into the sword to create a massive of energy, obliterating everything in its path.

He is not violent, but not trustworthy either. He can be very impulsive and make rash decisions, so if you see he is not in the mood, don't stand in his way!

as part of a series of characters I designed, to explore the idea: what if everyday school kids got superpowers?

So in this tutorial, we will cover basic concepts of design, sculpting, modeling, texturing and lighting, doing hair using and rendering in Redshift for Maya. 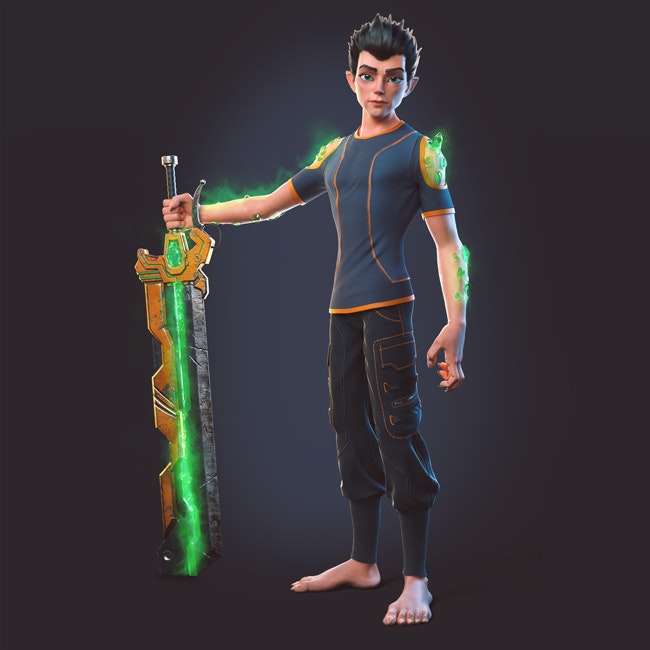 Step One: Inspiration and Mood Board

At the very beginning, I like to go do as much research as possible on the subject that I am working on. First thing I do is to write a basic story about the character. I try to answer as many questions as I can because those answers will drive the entire design.

After that, I usually assemble as much reference as possible, to help me with the design process. I try to categorize my references in smaller groups such as clothing reference, main mood board, pose reference,. So when I need them they are easy to find.

For this process, I like to use a software called PureRef. It is free, and a very powerful tool for reference collections. 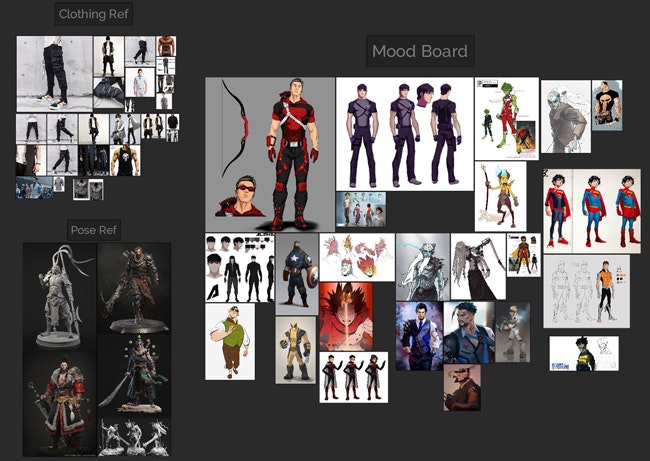 Because Ragnar was the last character in my superhero kids series, I already had a base mesh with good topology from one of the other characters called Max. I took the body of Max and deleted all the high res and also smoothed out defining features of Max. That way I had a blank canvas to start.

At this stage, I am trying to find a basic silhouette, and I am not worried about secondary forms just yet. 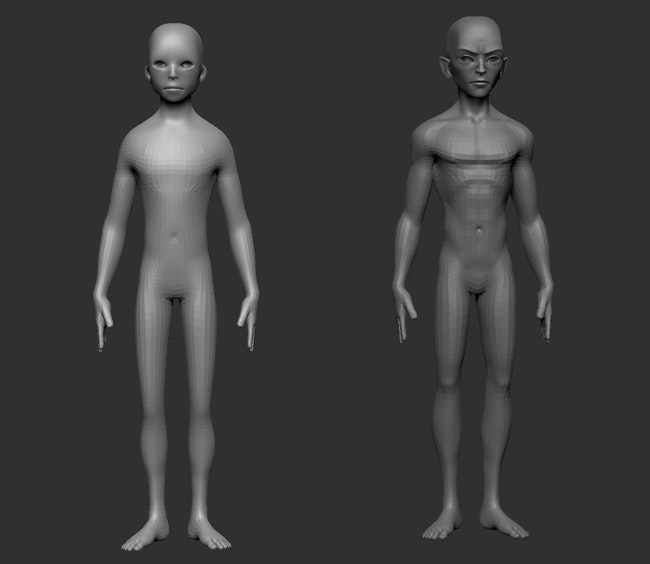 After the block out, I started to subdivide the base mesh to get more of the personality even in the neutral symmetrical pose.

I tried to sculpt as much of the character in the symmetrical pose before I posed it and break the symmetry because it is a great time saver. At this stage, I started to sketch the hair, decided that he have exaggerated hands and feet, and even started to do a of posing, but still keeping it symmetrical.

Following the story I established, I next added the crystals to his body, designed the clothing and started to play around with posing. After a few different attempts, I him a big sword and go for a strong and confident pose, showing the character standing his ground, looking at us, ready to attack, or defend himself. 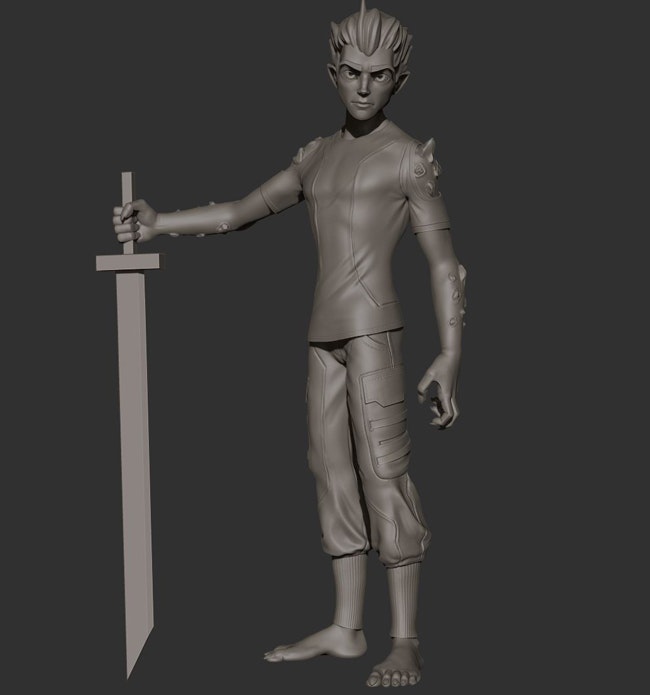 the design of the sword I took a different approach. Instead of starting it directly in 3D like the body, I did a few sketches first, and when I was happy with one of them I moved forward in 3D to see if my 2D design would work. 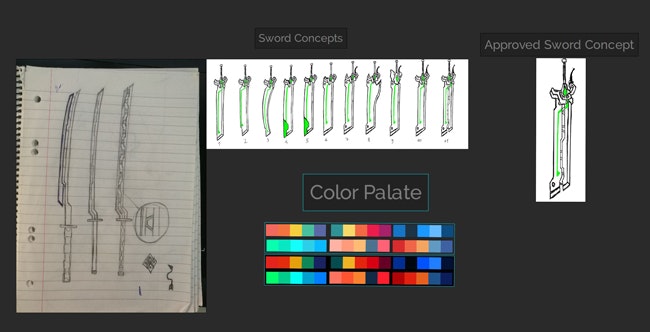 Modelling the sword in Maya was fairly straightforward. I imported my concept as an Image Plane and using box modelling I modelled the sword. After that, I did the UV’s and imported the sword in to add some damage to it. in Substance Painter using Fill Layers and Smart Masks. 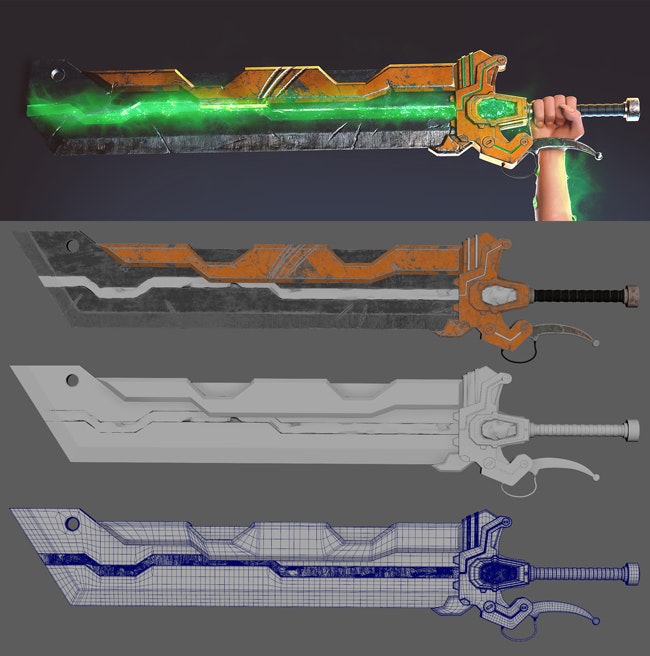 The body and the clothing in Substance Painter. Instead of the traditional method of painting the colours to get the skin effect, I used layers with the desired colours and then painted masks to reveal the colours on the body and the face. This allowed me to the colours after the fact, to fine-tune the final Diffuse map.

These fill layers didn’t have any roughness, height or normal channels. after the fact using another layer and mixing some fractal noises and procedural textures.

using Redshift for Maya. Redshift is a GPU Render engine and because of that is insanely fast.

I tried to keep the lighting as simple as possible, but also to have creative control over the final render. I used

6 lights. One Area Light serving as Key Light placed above the head, 3 Area Lights behind the character, with different colours and intensities serving as Rim Lights (to draw out the silhouette), one Dome Light with HDRI map to give some fill light in the shadows, and one Specular Only Light, light linked to the eyes for nice highlights. 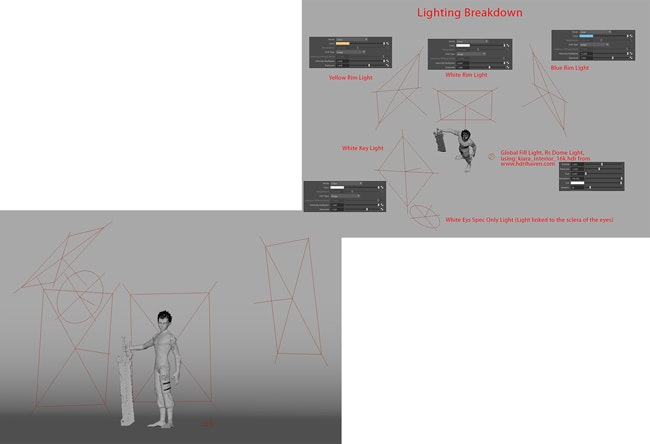 using . Following the hair sculpt, I drew a few curves on top of the geometry and then converted them to Hair Guides for . Then I tweaked the parameters to get the look that I want, like the length, thickness, density of the hair, etc. After that, I added a few modifiers like , curl, noise and cut, to give a more natural feel to the hair.

I then repeated the same step for the eyebrows, eyelashes and pitch fuzz for the body and the face.

I learned a lot doing these character It forced me to think a lot more about who they are and how to convey the story I wanted to tell, instead of focusing on just creating cool characters.

I recommend this kind of study to everyone that is looking to improve their design and storytelling skills, and I hope you find this tutorial useful. 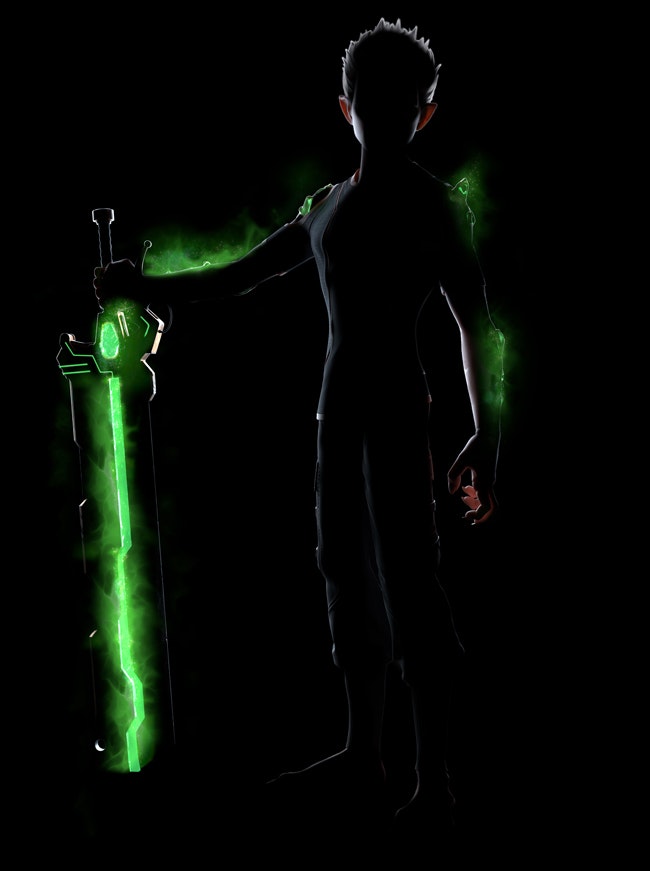 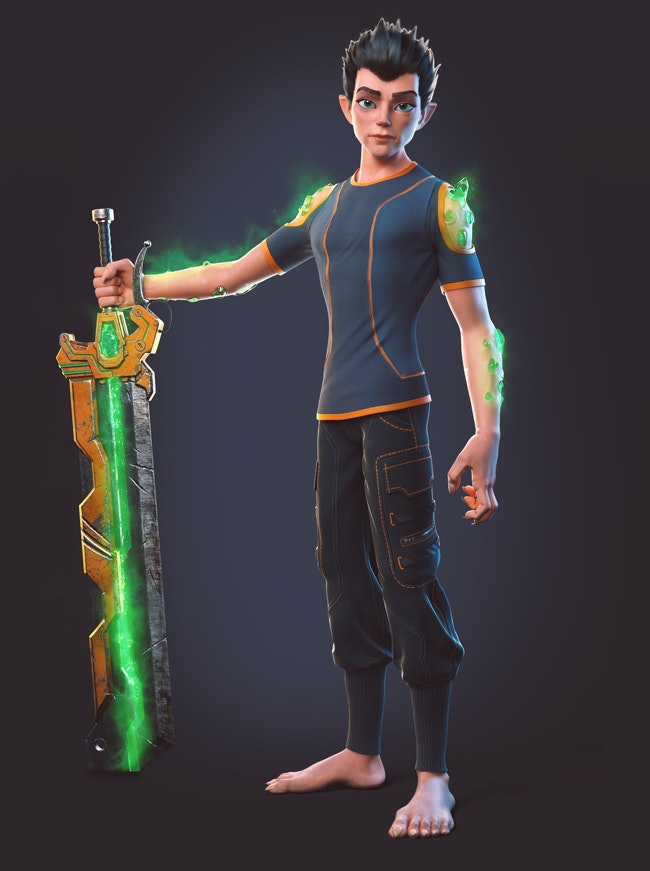 You can check out lots more of Darko's amazing characters at: www.com