Nella the Princess Knight has been nominated for a GLAAD Media Award in the Outstanding Kids & Family Programming category for the episode “A Tale of Two Nellas”! 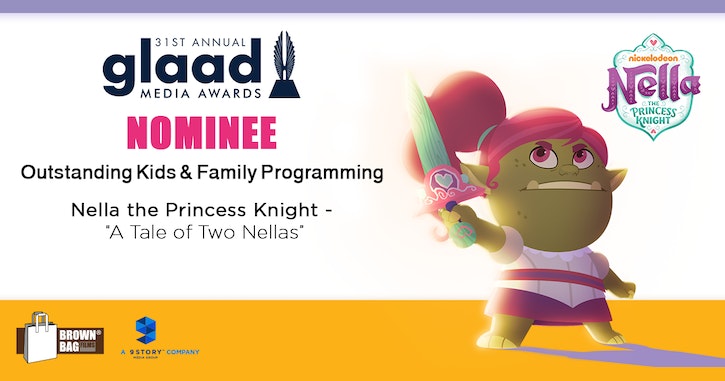 In the episode “A Tale of Two Nellas”, which premiered on Sunday, October 20, 2019, when Gork dresses as Nella for a costume party, a tricky villain mistakes him for the real princess knight!

Nella the Princess Knight has been nominated alongside Andi Mack, The Bravest Knight, High School Musical: The Musical: The Series, The Loud House, Arthur “Mr. Ratburn and the Special Someone”, Rocko's Modern Life: Static Cling, She-Ra and the Princesses of Power, Twelve Forever and Steven Universe: The Movie.

We are thrilled to see Nella the Princess Knight in such good company, as this year sees GLAAD expand the Outstanding Kids & Family Programming category to ten nominees as a result of an increase in LGBTQ images across the kids and family television programming and an increase in GLAAD’s work to advocate for inclusion in this genre, since the addition of the category last year.

The GLAAD Media Awards recognize and honor media for their fair, accurate and inclusive representations of the LGBTQ community and the issues that affect their lives.

The GLAAD Media Awards ceremonies will be held in New York at the Hilton Midtown on Thursday, March 19, 2020 and Los Angeles at the Beverly Hilton on Thursday, April 16, 2020.

Check out the full list of nominees here: The Nominees for the 31st Annual GLAAD Media Awards