◄
Previous:
What We Learned from Animated Answers #MAF2019
Next:
Let’s Go into the Spiderverse #FanArt
►
Image © Manchester Animation Festival

Manchester Animation Festival took place last week and we were super excited to be an industry sponsor this year.

The line-up was better than ever with a few of our very own Manchester Brown Baggers taking part in the Animated Answers panels. Our team also got the opportunity to attend some of the screenings and masterclasses at this year's event! 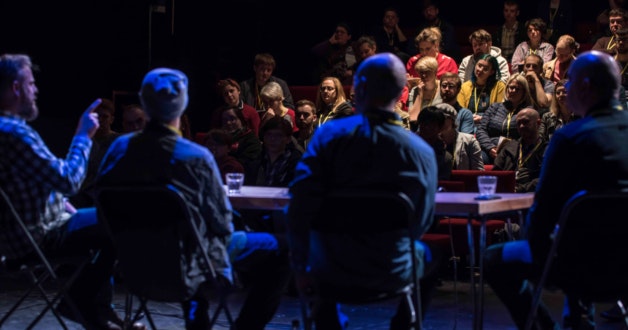 Take a scroll through our #MAF2019 highlights below: 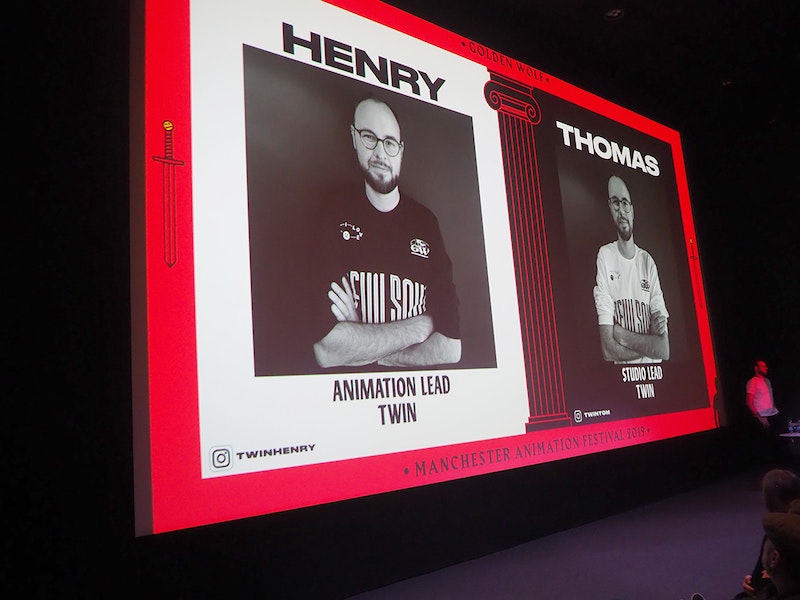 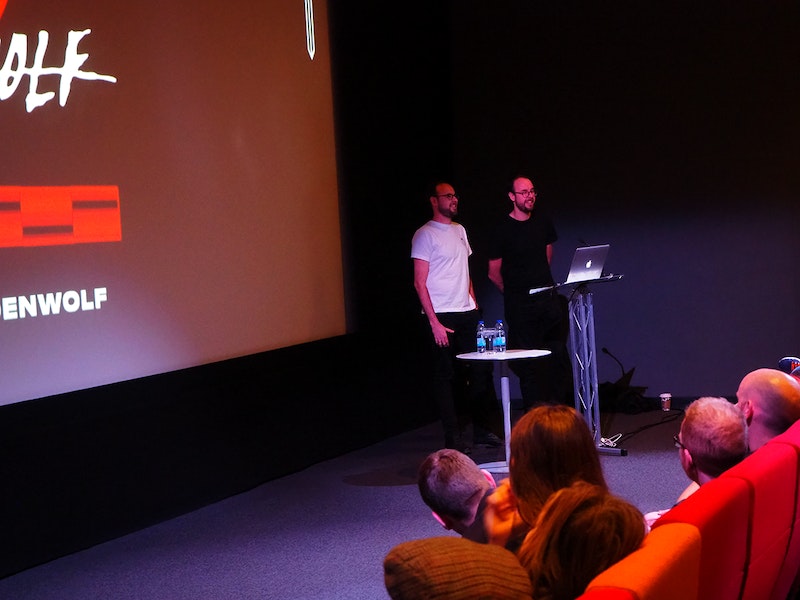 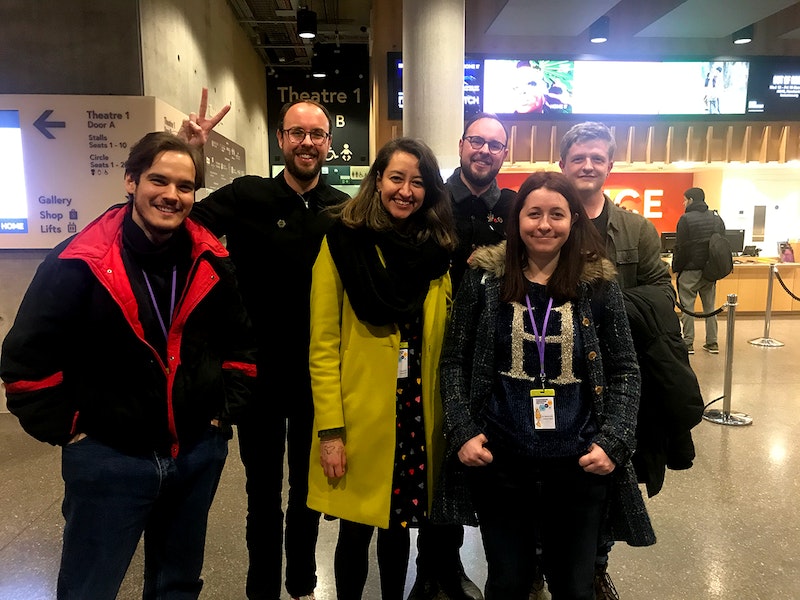 If you haven’t heard of Golden Wolf, where have you been! Since their inception they have quickly established a global reputation, catching the attention of major brands and networks such as Nike, Facebook, Gatorade, Disney and Adult Swim. Their work lives in the space between irreverent humour, intensely dynamic action and psychedelia. Twins Henry and Thomas Purrington talked us through their latest work breaking down recent projects and speaking about the importance of entertaining short-form content.

“The Golden Wolf talk was great. They are amazingly talented, cool and I am so jealous of everything they make. It was interesting to see them talk about how they approach their work and see how much work goes into a project with only a few weeks turnaround. I enjoyed learning their process. How they create initial drafts of ideas from found footage and then recreate it in their own style based on whatever source material they have found.”

“The Golden Wolf talk was extremely inspiring, full of beautiful animation and visually stunning projects. Their specialisation was in advertising, so there was a large emphasis on making things snappy and eye-catching. Golden Wolf also showed their processes of working and their solutions to certain clients' briefings – how some are less specific and others are more specific about what they want and what they visualise.

Experimentation and creativity seemed like the big takeaway, where putting yourself out there may land you something amazing.” 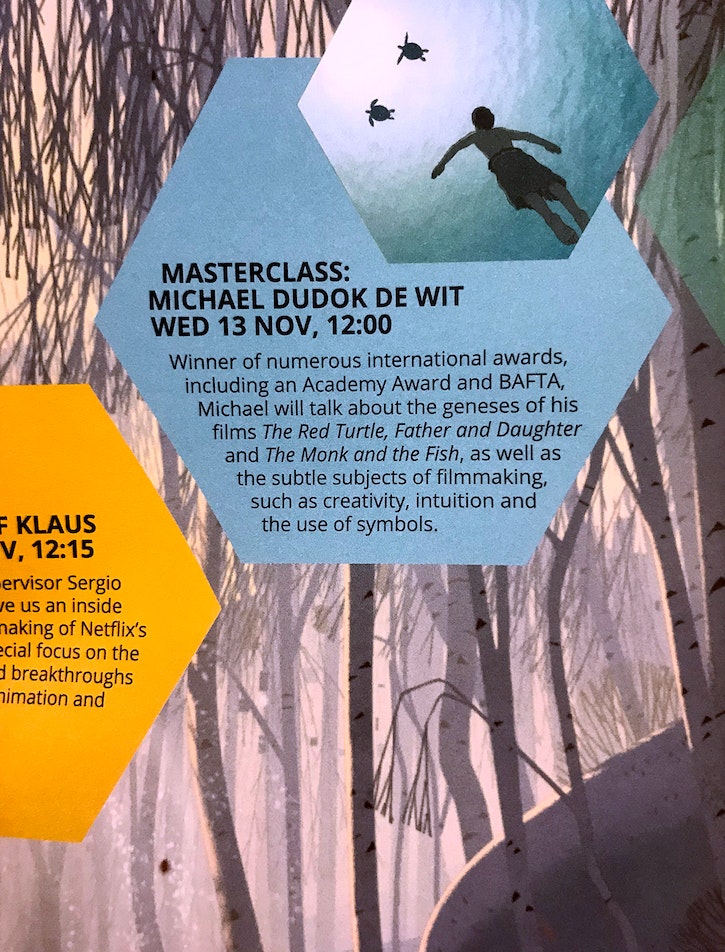 Michael Dudok de Wit grew up in the Netherlands and lives in London where he directs TV commercials and independent animated films. His shorts have won numerous international awards, including an Academy Award and a BAFTA award in 2001 for Father and Daughter. His most recent film, The Red Turtle (2016), is his first feature length film. Michael talked about the geneses of his films as well as the subtle components of filmmaking.

“He is so down to earth, very modest and a super interesting person. He explained how he still has doubts regarding his work. Every idea needs to be overslept, sometimes for days, months or years. Beauty is in simplicity, creativity is thinking, research, music, images, sketching, reading… It’s important to be curious.  His inspirations include French illustrator Sempé, Tin Tin and of course, Japanese calligraphy.

For his short film Aroma of Tea he knew that it wouldn’t be popular with the public, because it was very abstract and his inspiration was Japanese calligraphy but he wanted to do it. We don’t need everybody to love our work. He experimented using boiled tea as a colour. He boiled a lot of tea bags for hours and then tested if it was a stable colour by putting cardboard on a daily light for weeks. When he saw that the colour wasn’t changing, he used it for his animation.

His short films build up with the music, he uses music beats as frames. Even when you look at his drawings they are like poetry for the eyes. Michael particularly likes shadow because it shows exact time of day, it’s graphically interesting, enhances animation in backgrounds, sculpts objects and defines texture. It is in sync with character movement so it’s like having two dancers that are completely synchronized.

I learned that storyboards need to be simple and clear, that the beauty is in simplicity, that is never too late to start working on a private project, that it is normal to have a project in a desk that will never see the daylight and that’s not our failure, that having doubts is a completely normal thing and that it is important to be curious.”

EVENT: Making It In Manchester 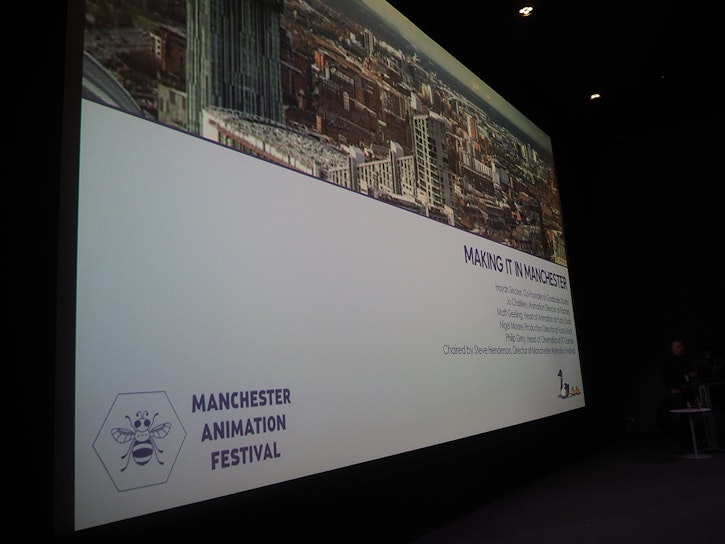 Manchester is a hub of animation in the UK, a selection of studios and practitioners showcased their work and what makes Manchester one of the nations premier animation hotspots. Speakers included Philip Gray from TT animation, who has personally worked on over 20 Lego games, and Jo Chalkey who has worked for animation for companies including Cosgrove Hall Films, Factory Create and Aardman Animations.

“It was good to see what others have been creating and seeing the innovation being done locally as these types of things are usually on the down low. It feels like the handcrafted projects are having a bit of a revival. I enjoyed seeing mummy Clanger out and about and the video of the singing cupcakes.” 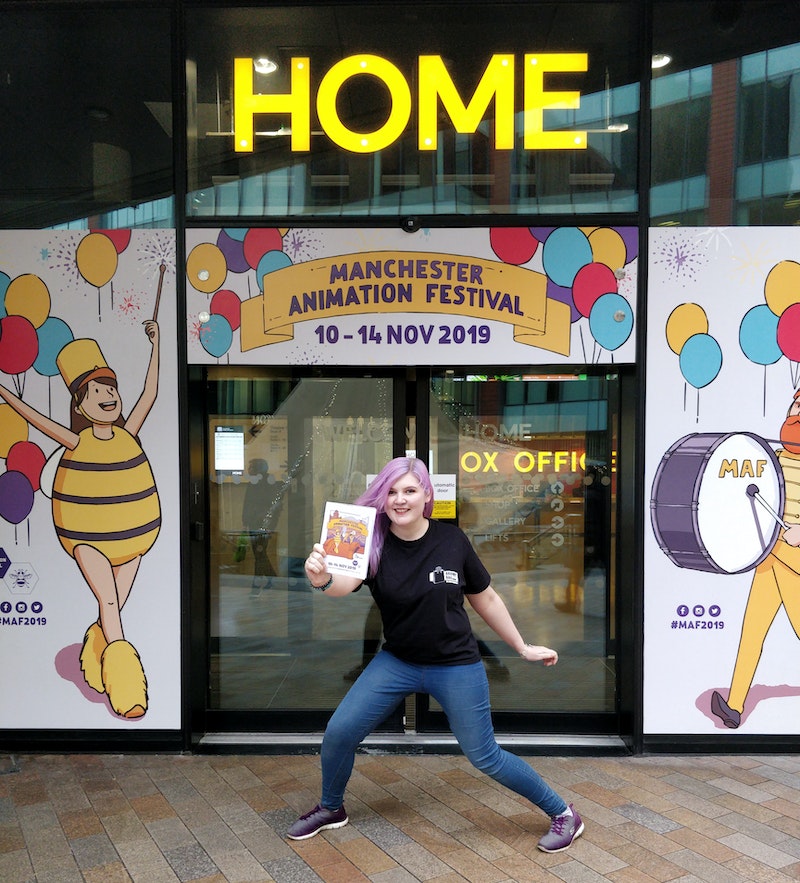 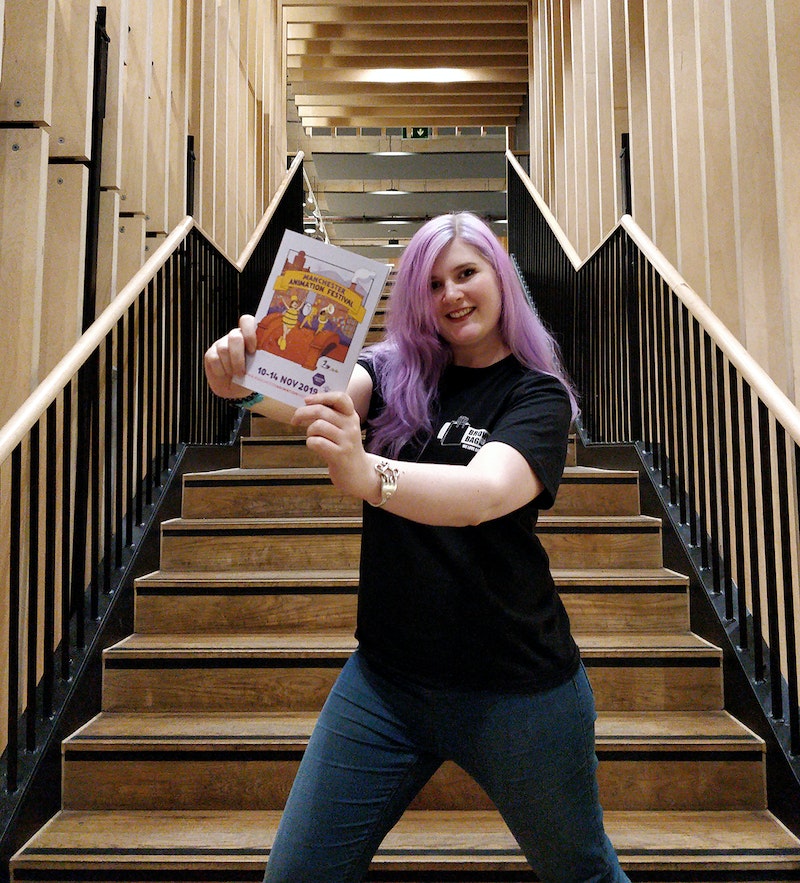 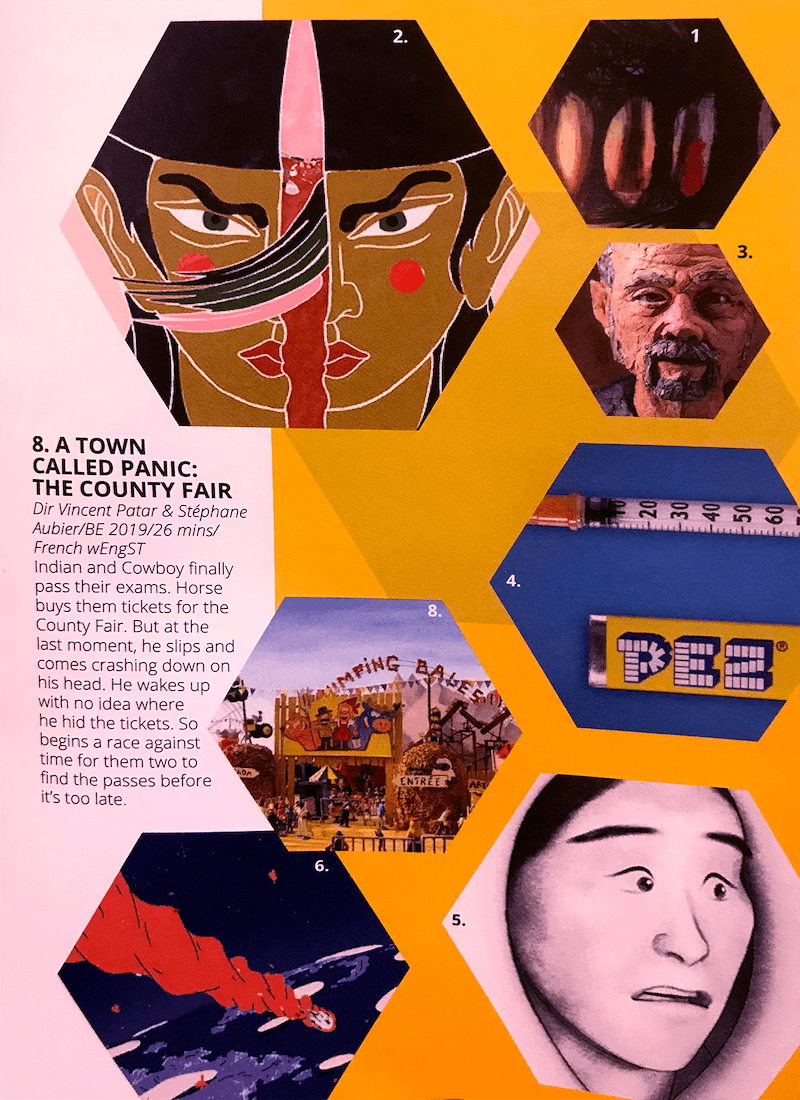 The screening presented some of the best animated short films from around the world. These superbly crafted short films invited the audience to indulge in animation as they demonstrate the remarkable potential of the short form.

“The screening consisted of 8 very impressive shorts, each one an intensely different subject matter. Opening with a harrowing chalk and paper stop motion of the true story of 7-year-old Xiana Fairchild’s abduction and murder and ending on a whimsical and humous 26 minute episode of A Town Called Panic, involving turning a washing machine into a time machine.

Another must mention is Mémorable, a stunning painterly style of stop motion armatures, the film centres around a man losing grip with reality, he doesn’t recognise technology, his reflection and ultimately his wife, as his condition worsens the puppets and surroundings lose their realism and become more inspired by abstract art, his family seem to him unfamiliar Picasso faces. Eventually his world becomes simple blobs of paint. A moving and very creative short.

Short names and Directors for those who’d like to look them up: Girl in the Hallway by Valerie Barnhart,  A Town Called Panic by Vincent Patar & Stéphane Aubier, and Mémorable by Bruno Collet.” 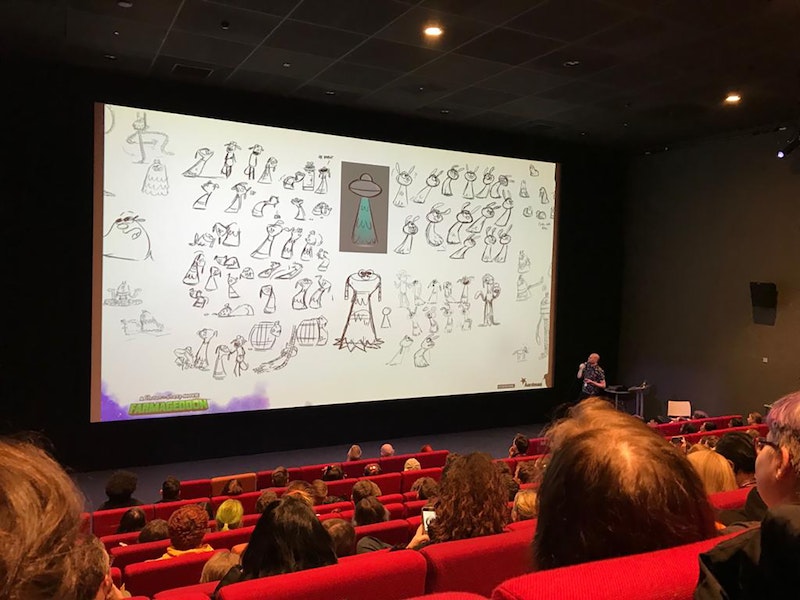 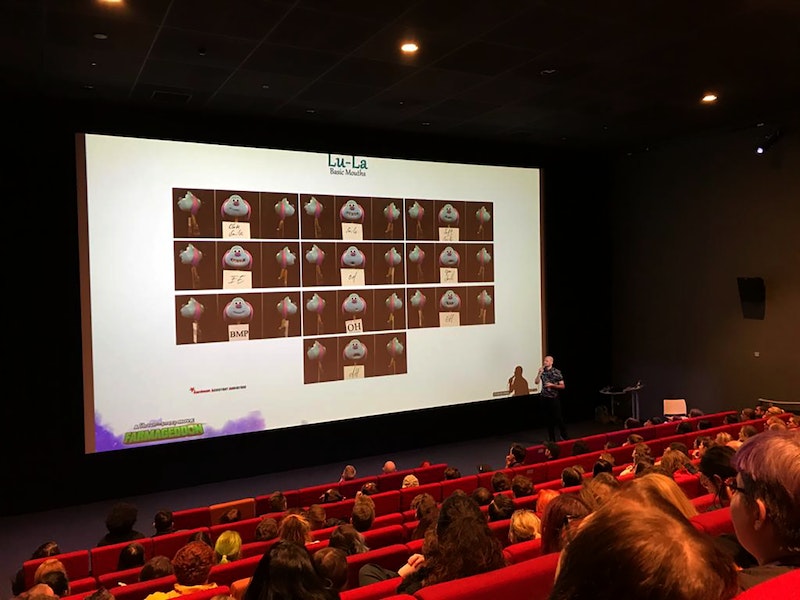 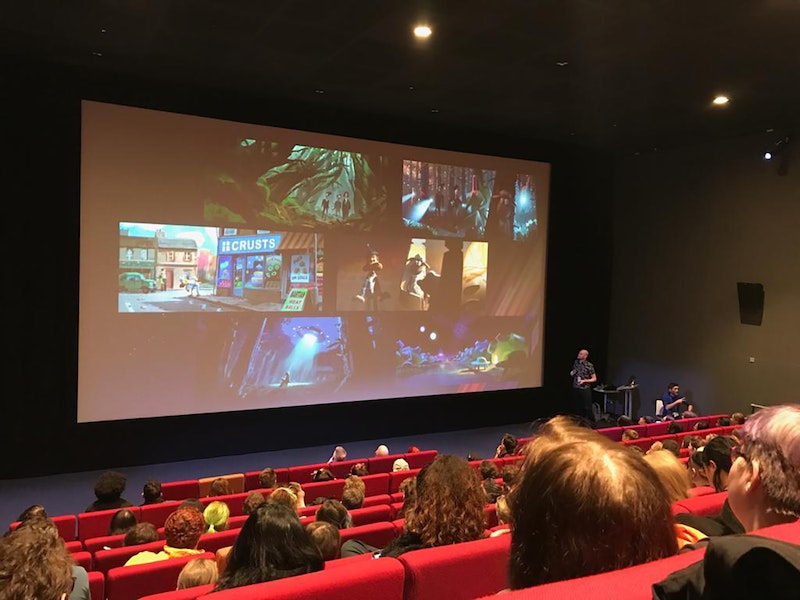 MAKING OF: Shaun the Sheep Farmageddon

Farmageddon is the follow up film to the 2015 hit Shaun the Sheep. Director Will Becher gave attendees a glimpse behind-the-scenes at Aardman as well as sharing the classified secrets of his stellar stop-motion sequel.

“It was a great insight into what goes on in the Aardman studio. We learned that each character created by the model makers takes 6 weeks to create, to then be squashed, stretched and destroyed by animators on set! We saw the building of a set which can be constructed with separate wooden pallets, so that if an animator couldn't reach a certain part of the set, part of that set could be easily removed then put back once the animation was complete. Plus there was information on what some of the new character designs were influenced by, where their names came from and what was used to build the world and setting that the movie takes place in! ” 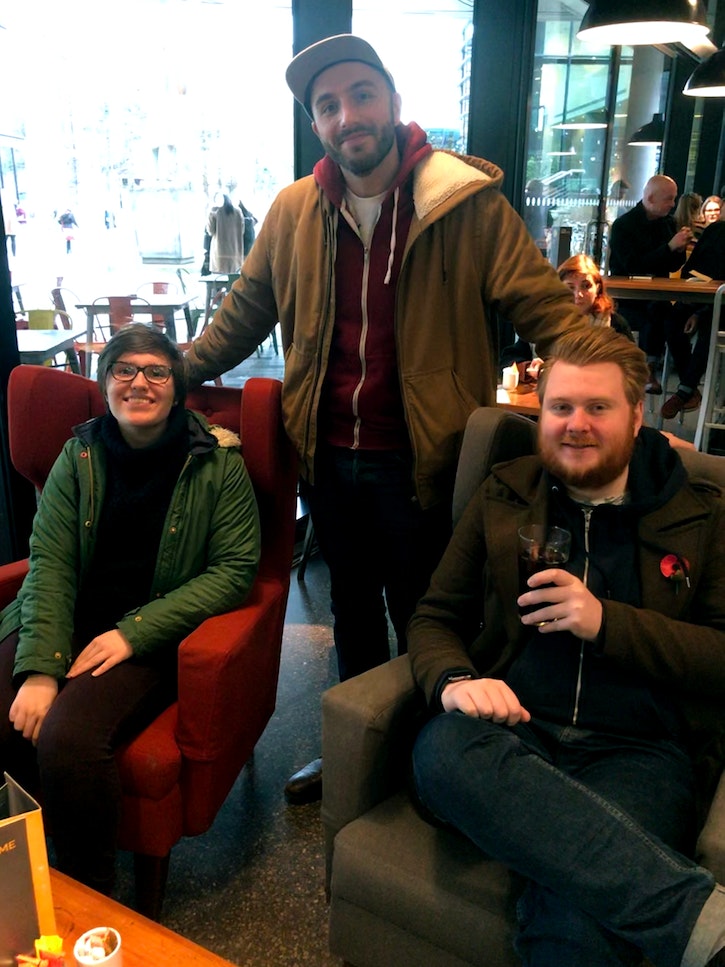 Animation Supervisor Sergio Martins gave an inside look into the making of Klaus, with special focus on the challenges and breakthroughs of character animation and development! Klaus is a Christmas movie that tells the story of a bratty postal employee who is stationed above the artic circle and finds a friend in the form of a jolly bearded toy maker.

“The Making of Klaus was a great, in-depth look behind the scenes of the film. Sergio Martins presented a lot of development artwork and early animation tests to show how the look and style was refined over a long period of time. The pencil tests were fascinating, and he told lots of behind the scenes stories about how certain sequences were created and where ideas came from, as well as how they managed to create new technology to develop the unique visuals. It was a great reminder of what can be created when you work with talented people at the top of their game, and gave me a renewed appreciation for hand-drawn animation.” 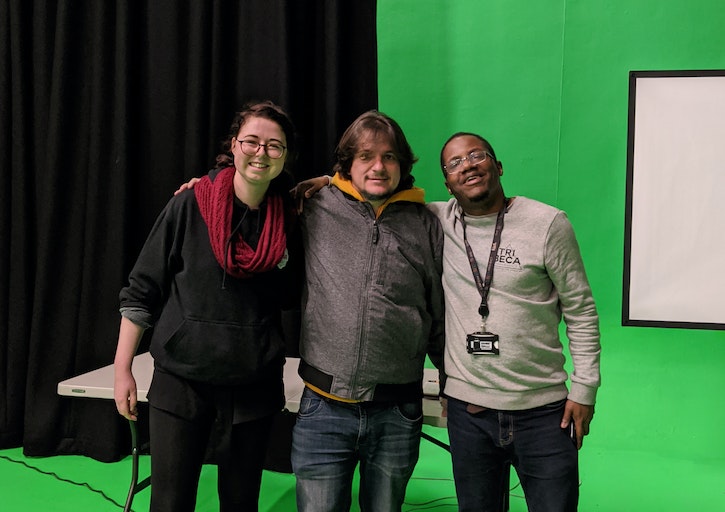 We were lucky enough to have Sergio in our Manchester studio for our own private talk!

And, of course, inbetween screenings and masterclasses our crew were fielding questions and chatting all things animation at the Animated Answers panels!

“Tailor your CV and Showreel to the job your applying for.” 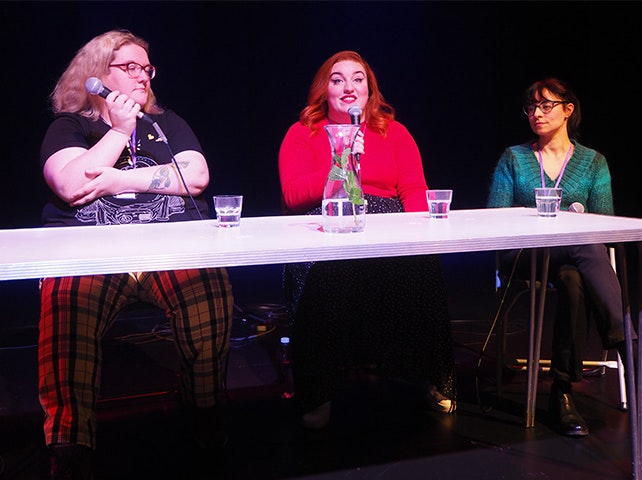 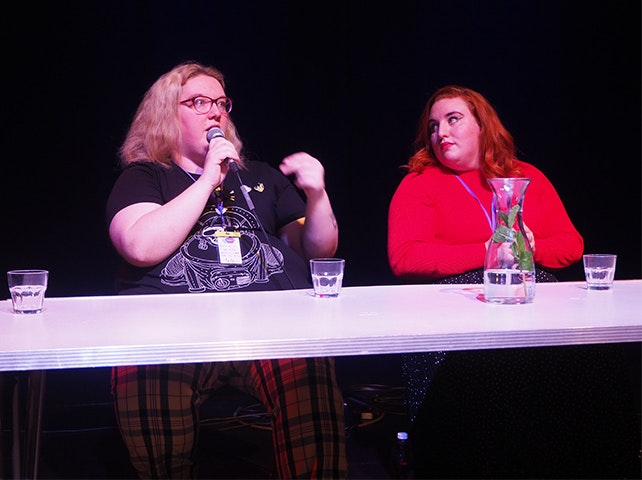 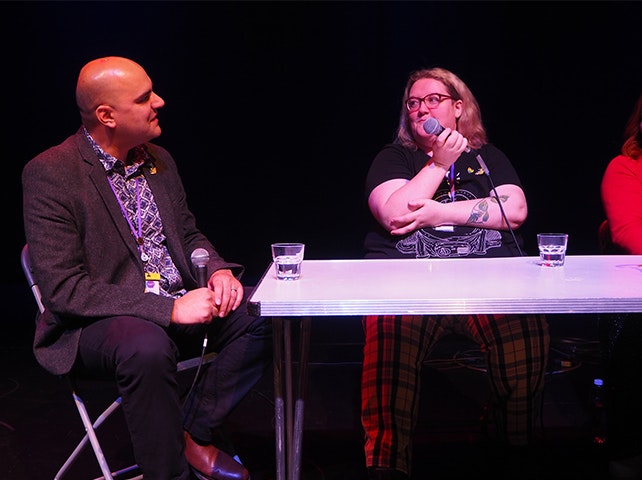 That same afternoon, our Lead Animator, Abigail Fairhurst, took to the stage for 'Animated Answers – 5 years and counting, making the most of your early career'.

Abigail was joined by Blue Zoo's, Dane Winn and freelance 2D Character Animator Amanda Holm. They shared their wisdom and what they’ve learned in their first five years working in the animation industry, passing on invaluable tips and tricks onto those starting out in the world of animation! 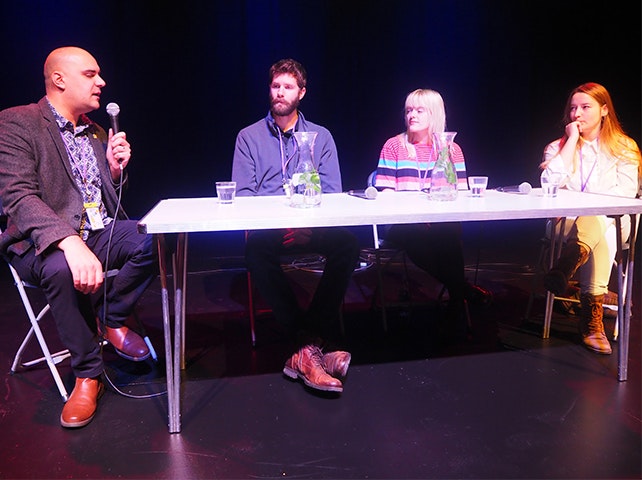 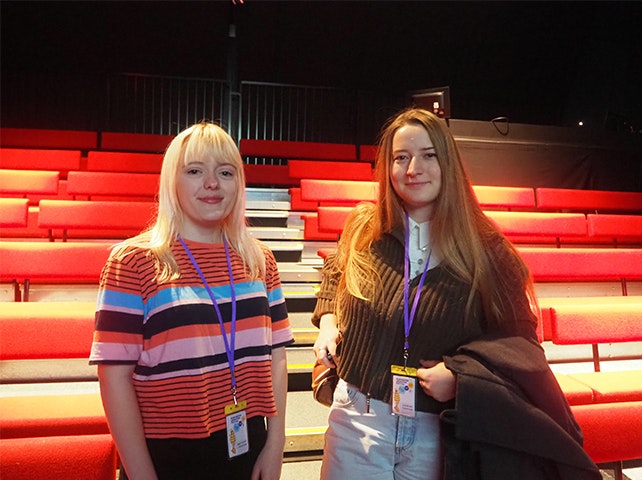 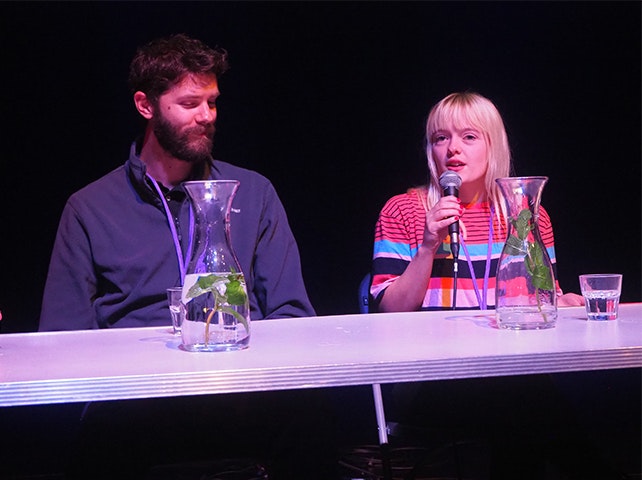 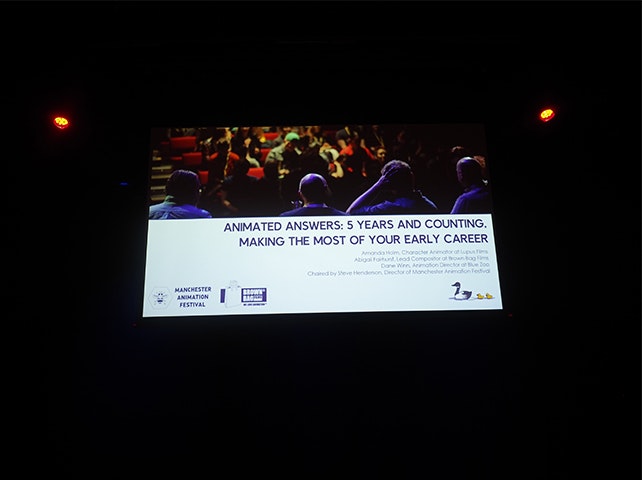 Wednesday 13th kicked off with 'Animated Answers – The A-Z of an Art Department'  where our talented Art Director, Gierdre Kaveckaite and 2D Layout Supervisor Francisco Ruiz, shared their deep knowledge of the industry joined by Karen De Jong, Art Director for Locksmith Animation and Philip Gray, Animator, Writer and Director at TT games.

“There is more than one path to get to your dream job.” 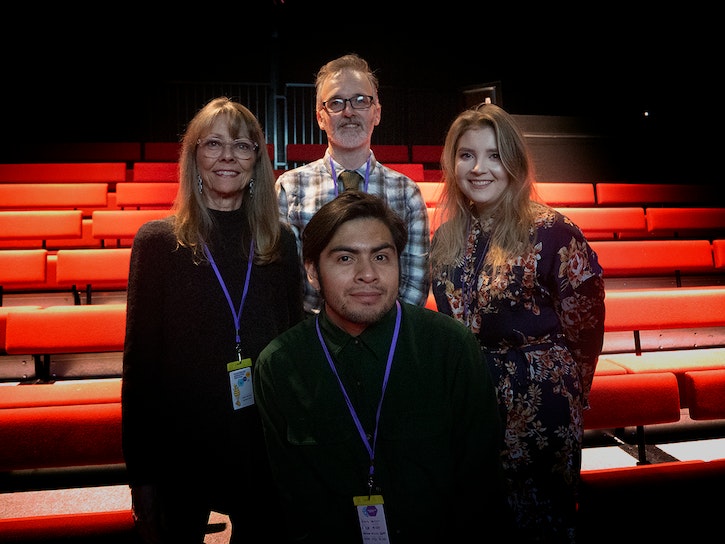 That afternoon our Director of Operations (UK), Sarah McQuire and Head of 2D UK Erica Lack were also joined by Jamie Badminton, Creative Director and Co-Founder of Karrot Animation and Helen Brown, Animation Producer, founder of Hoopla Animation and creator of ‘Daisy & Ollie’, to discuss 'Animated Answers – Setting up Shop, making an animation studio' for an indepth look into the ins and outs and day-to-day running of an animation studio.

“Use the software you enjoy using.” 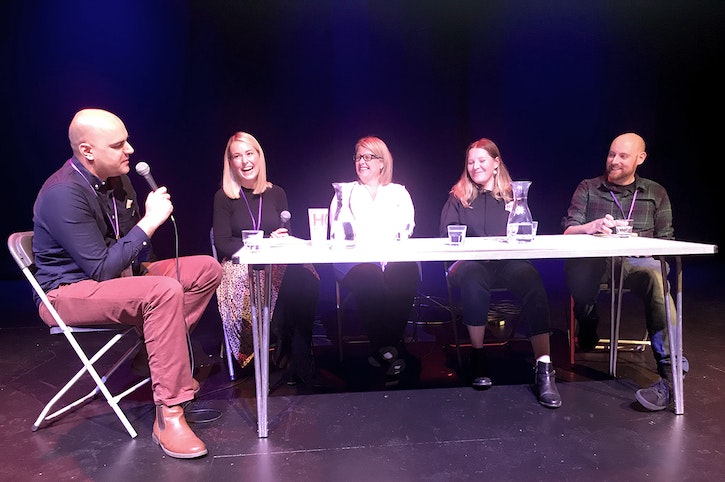 Be sure to check out What We Learned from Animated Answers to get some of our key takeaways from the panels! 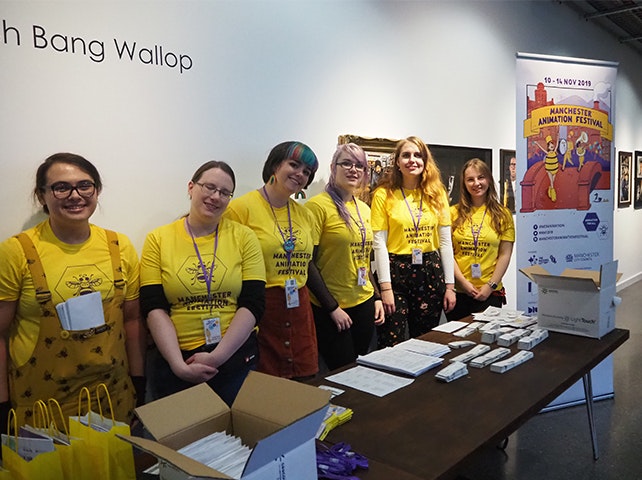 A big thank you to everyone at Manchester Animation Festival, including all the wonderful volunteers and attendees!

We can't wait for next years event!