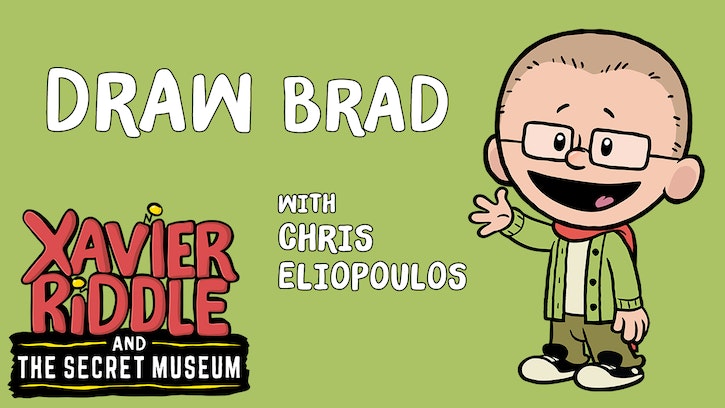 For those who don't know, Xavier Riddle and the Secret Museum is a comedy-driven animated-adventure, based on Brad Meltzer and Christopher Eliopoulos’ best-selling kid's book series, Ordinary People Change the World. In the show, we follow the adventures of Xavier, Yadina, and Brad, as they travel back in time to meet famous heroes from the past and learn how to be their own heroes in the present!

But, before we could bring the magic of the Secret Museum to your screens, Chris had to get drawing! Not only is Chris Eliopoulos the illustrator for the Ordinary People Change the World books, but he is also the co-creator of the Xavier series. His illustrations were the foundation for the animated friends we see today, including none other than everyone's favourite friend - Brad!

So, let's get to know Brad a little more! Brad is Xavier’s best buddy, and while he is extremely anxious and has a long list of fears, he loves going on adventures with Xavier and Yadina. He, is also the kid who needs to be reminded that everyone, including great historical heroes, were once a kid just like him, with fears, flaws, and doubts and all those other compliacated emotions that come with growing up. Finally, fun fact - did you know that Brad loves butterfiles and he started his very own butterfly club!

Check out the video below to learn how to draw Brad on your own with the one and only Christopher Eliopoulos!