It's a BIG day today, as we celebrate the 10th anniversary of the premiere of Doc McStuffins on Disney Junior on this day, March 23, in 2012, where it broke ratings records to instantly become the No.1 preschool show on U.S. television!

Doc McStuffins, an animated series about a six-year-old girl who heals stuffed animals and toys in her backyard clinic, follows Dottie “Doc” McStuffins and her stuffed animal friends Stuffy, Lambie, Hallie and Chilly as they care for and nurture a toy in need. The series, which was created by Chris Nee (Vampirina, Ridley Jones) and directed by Norton Virgien (Rugrats, Henry Hugglemonster), went on to garner numerous awards including the prestigious Peabody Award, two Kidscreen Awards and multiple NAACP Image Awards.

Doc McStuffins was the first animated preschool series to star a Black female lead, and even went so far as to inspire a medical movement, “We Are Doc McStuffins”, amongst African-American female doctors in the U.S. which was spearheaded by real-life physician and subsequent co-founder of Artemis Medical Society, Dr. Myiesha Taylor. Doc's mom was, in fact, named 'Dr. Myiesha McStuffins' in tribute to Dr. Myiesha Taylor!

Doc McStuffins spanned five seasons, an unprecedented run for an animated preschool series, making it one of the longest running Disney shows at the time! We completed production on the fifth and final season of Doc McStuffins in 2020, with the last episode having aired on April 18, 2020. 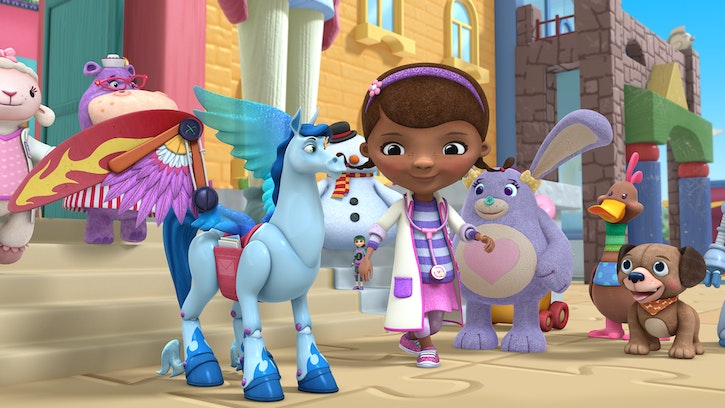 To mark Doc's wonderful 10th anniversary milestone, Disney Junior has shared a special music video for Walt Disney Records’ new digital single “The Doc Is 10!” performed by Laya DeLeon Hayes. What’s more, the channel is also airing a Doc McStuffins marathon on the special anniversary and there will also be a global live-stream of Doc McStuffins shorts on Disney Junior’s YouTube channel. In other words — The Doc is IN!

There's no doubt about it, Doc McStuffins has a very special place in our hearts, and the hearts of millions of little AND grown up Doc fans all over the world whose love, support and inspiring stories have tugged at our heartstrings and continually fill us with gratitude for being a part of something that has resonated so deeply with so many people.

We're so proud of our Doc and the amazing cast and crews all over the world who helped bring her world to life!

We hope you join us in wishing a very Happy Birthday to Doc McStuffins!