Our Manchester-based Layout Artist Pedro Martins has recently completed the fourth installment of his personal webcomic series, Horizon Down, available on Web Toon.

We chatted with him previously about it and how he engaged the audience in the narrative by having them vote for the character story arcs they wanted to see next!

This time we wanted to find out a little more about what was involved in putting each chapter together and design tips for creating a webcomic.

How long have you been creating webcomics?

I published the first two chapters of Horizon Down two years ago, but I've been drawing comics that were never 100% finished since I was a kid.

What are your influences?

Live action cinema is what inspires me the most, and I go through phases. Whatever director, cinema wave or genre I'm into during that phase will inspire the work I'm producing. During the writing stage, I remember studying some of Tarantino's opening scenes, watching ALL of the videos from the YouTube channel “Lessons from the Screenplay” many times, and the way Paul Thomas Anderson paces silence in a scene is super inspiring.

Visually, Wong Kar-Wai, Paul Thomas Anderson, and Kurosawa were names I definitely looked at. I also took a lot of inspiration from the streets of Manchester as I wanted this chapter to happen in an industrial looking city. 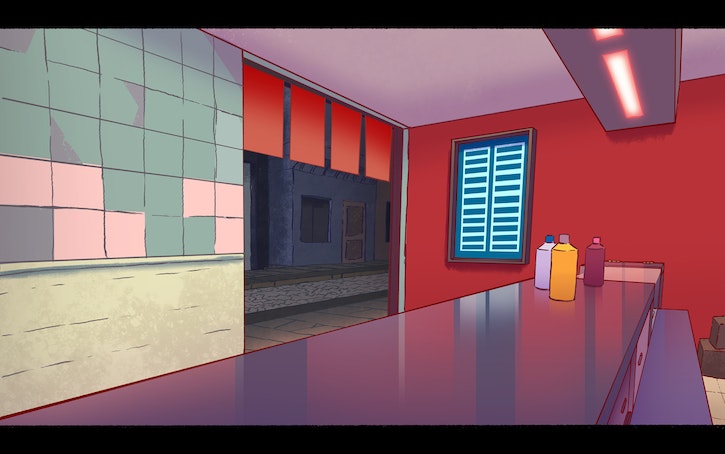 Can you tell us a little bit about the process involved in getting a chapter completed? What are the main stages?

I wanted to finish this as quickly as possible so I planned it like I would plan an animated short film. Wrote the script first, did some tests to see roughly how long I take to draw backgrounds and characters, scheduled the whole production, drew all pages individually, checked the flow for final adjustments and released it.

For each page, I'd first focus on what the page is trying to convey and how to push that as much as possible. At this stage, the key was to surround myself with people that are better than me and get their input. I would start with a mega rough sketch. This sketch will include rough background art, tone, character pose and speech balloons. I would pitch this to some of my friends. The first draft usually gets destroyed by feedback. From there I would make the composition clearer. Then focus on character pose, draw it, ask for feedback, get destroyed, make it better. Then the background design, same process. 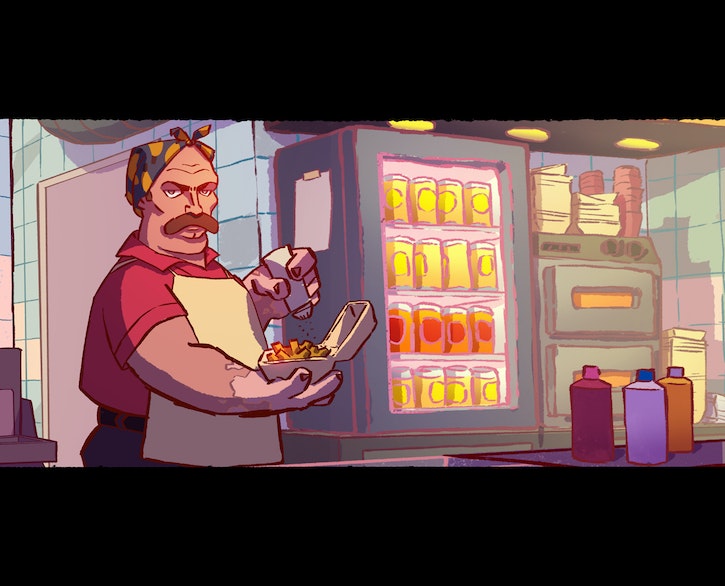 At the end, I would just make final adjustments with light and mood to make sure it flows with the previous panels and lock it. After this stage, I never retouch the page again until the very final stage of the comic and I make sure that the final, final retouches are minimal as I don't really like to look back when I'm doing something like this because my focus is on finishing it. 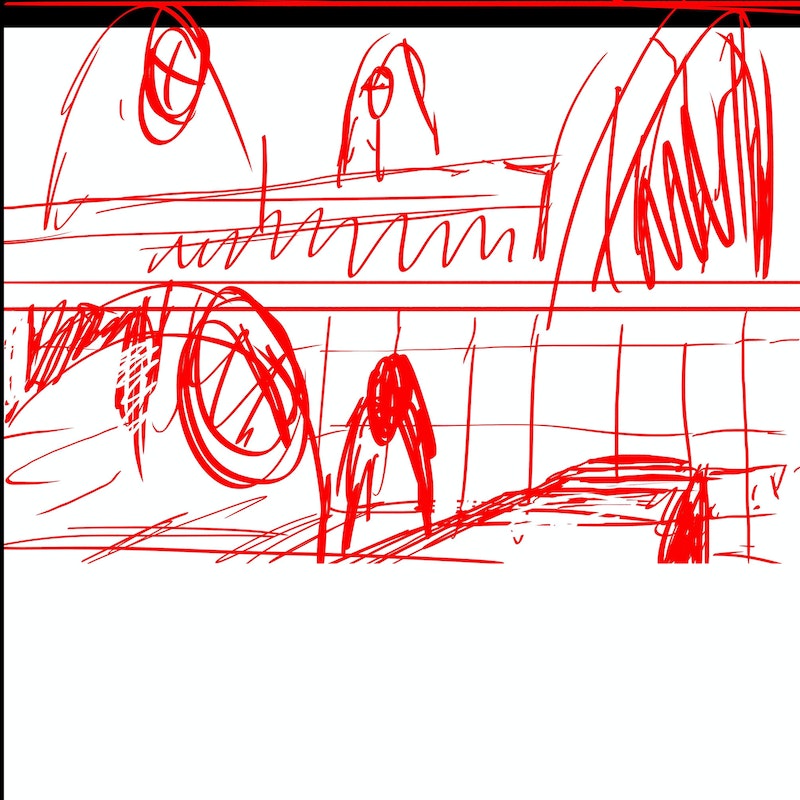 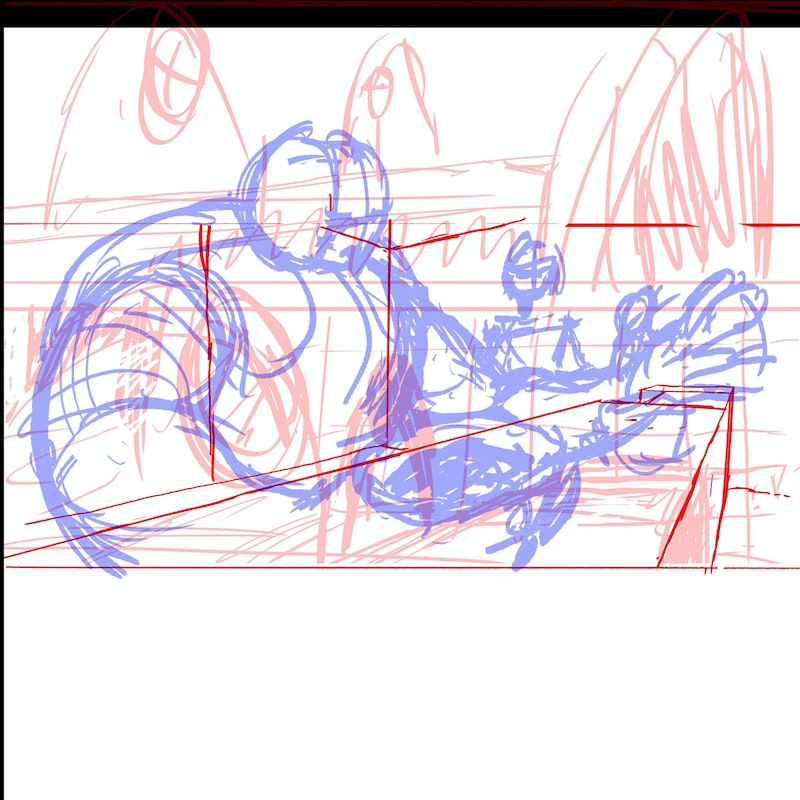 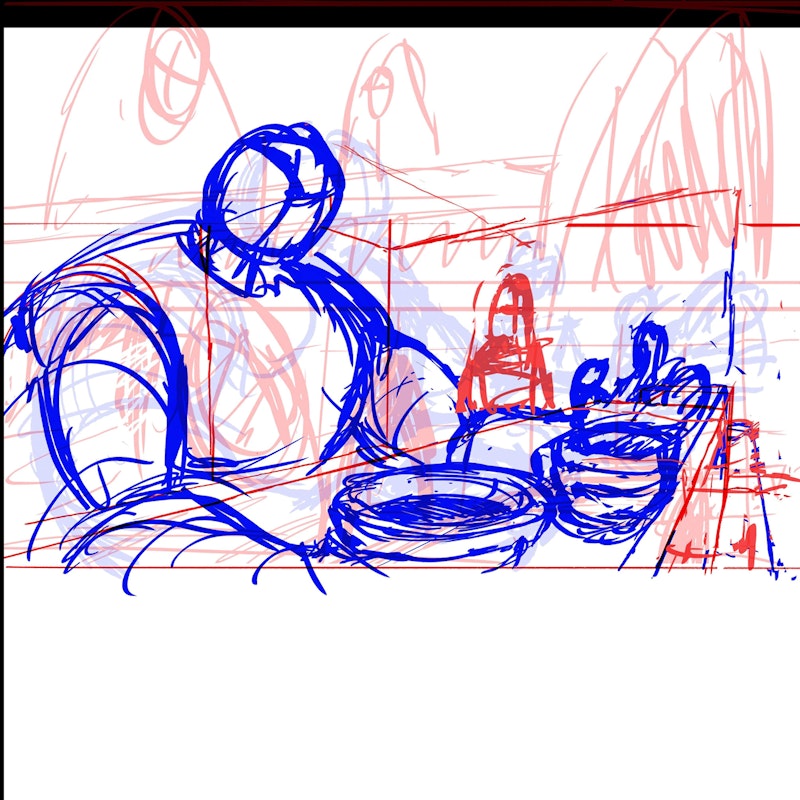 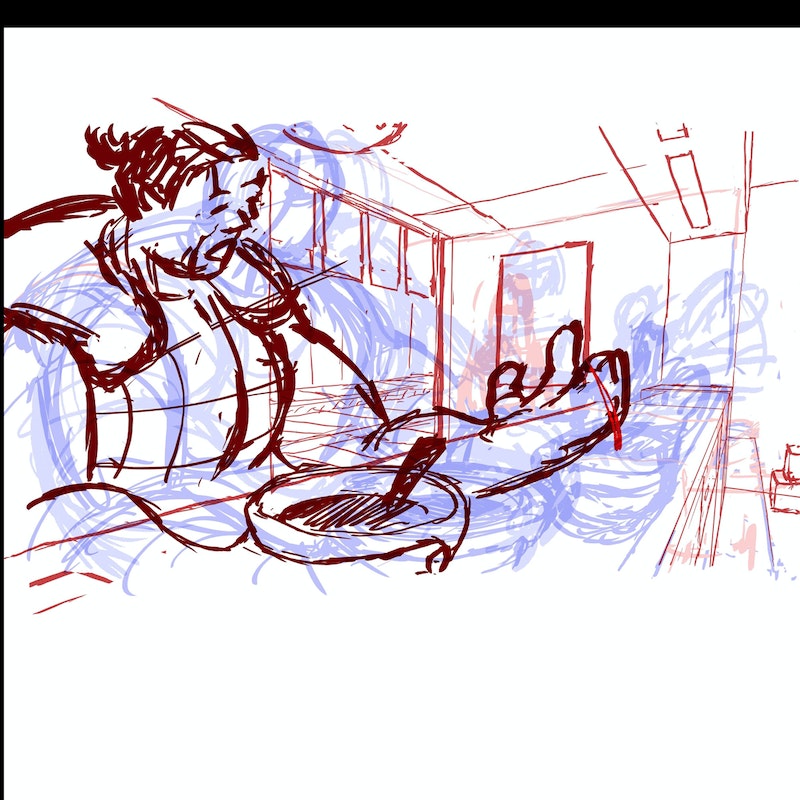 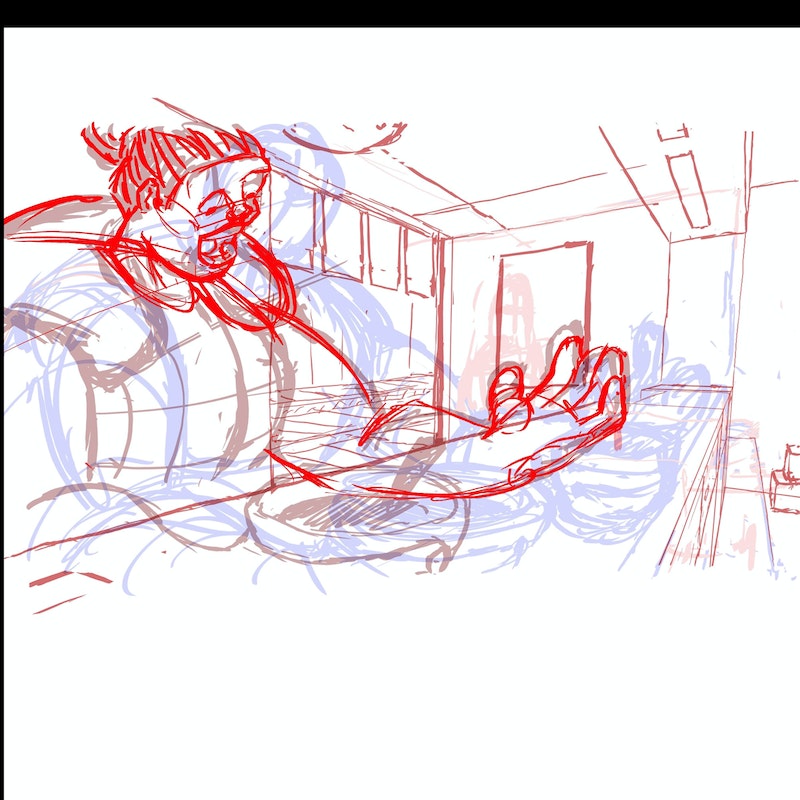 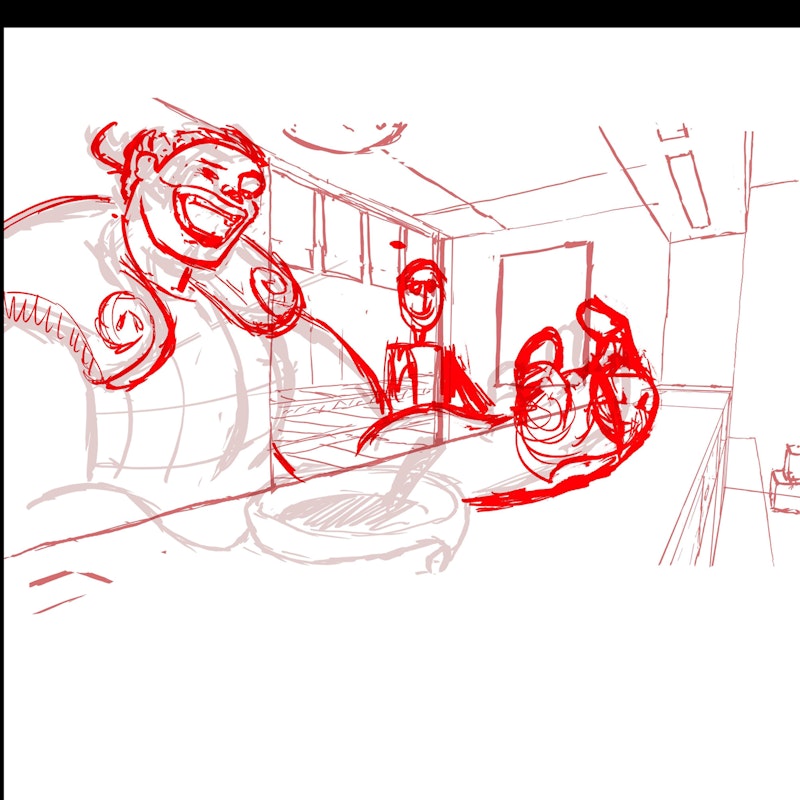 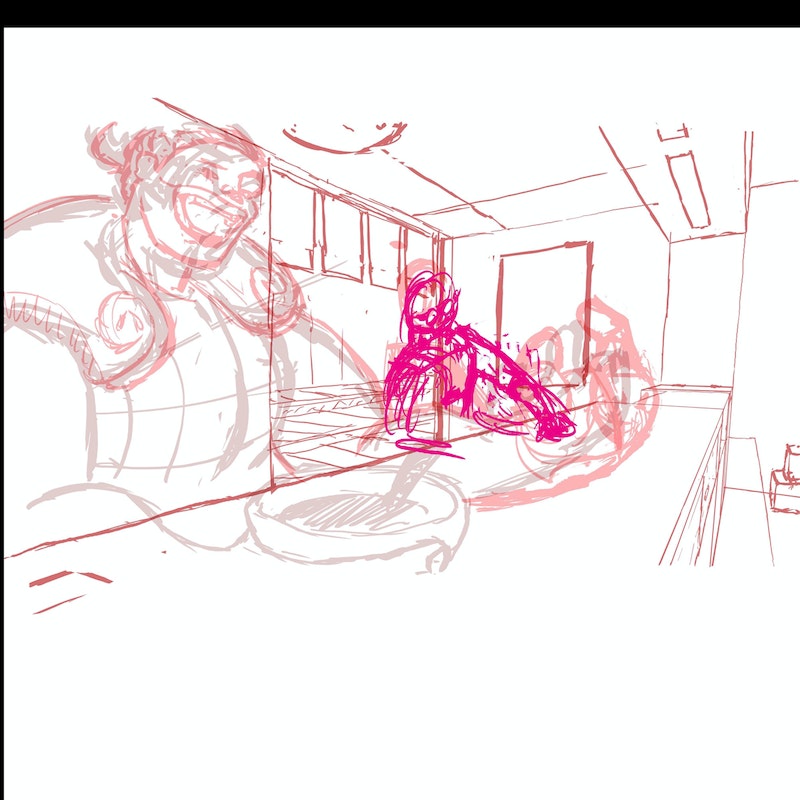 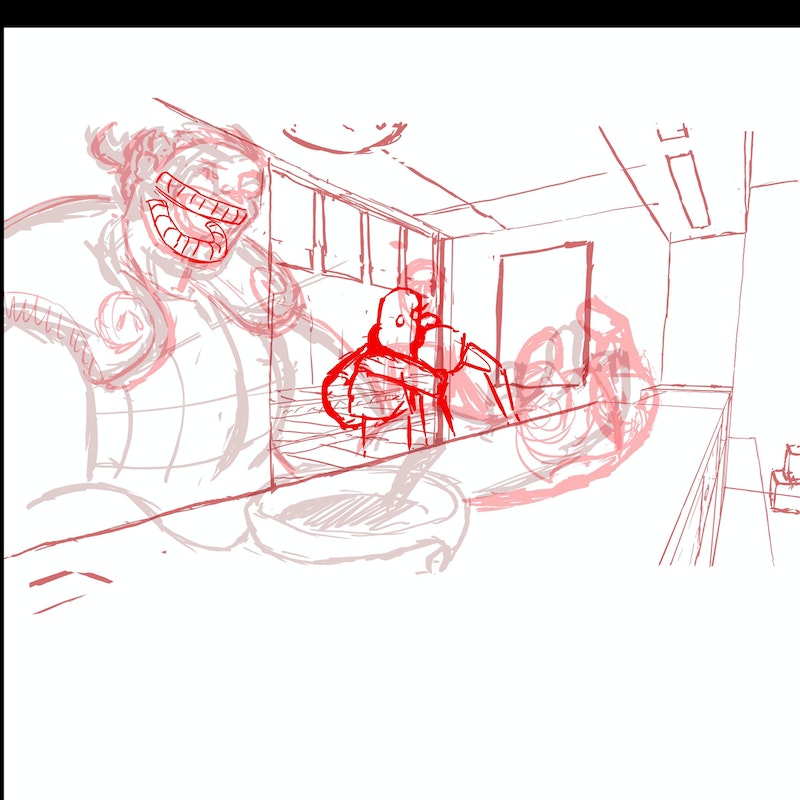 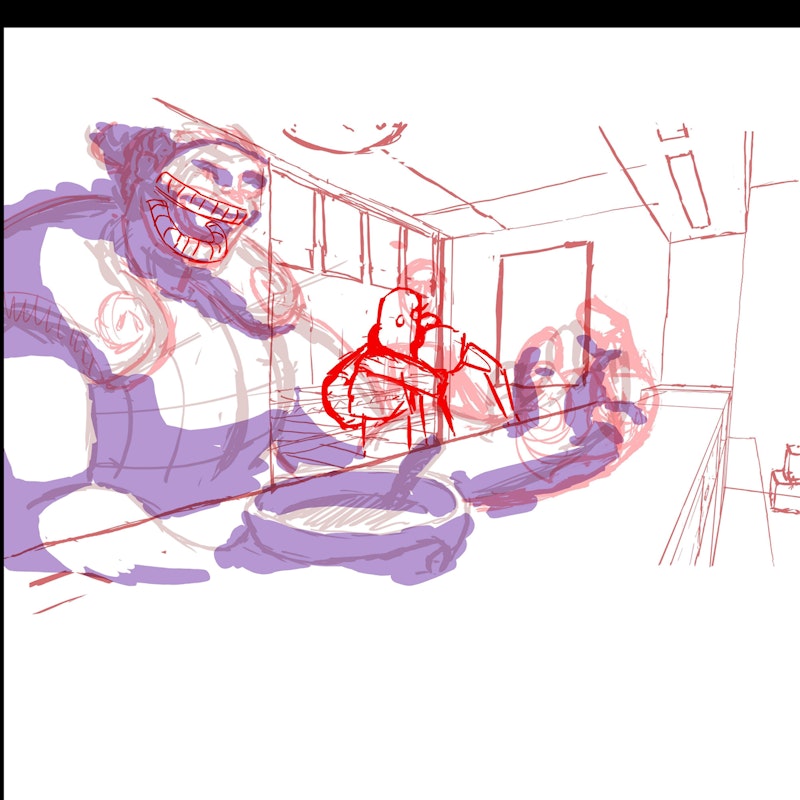 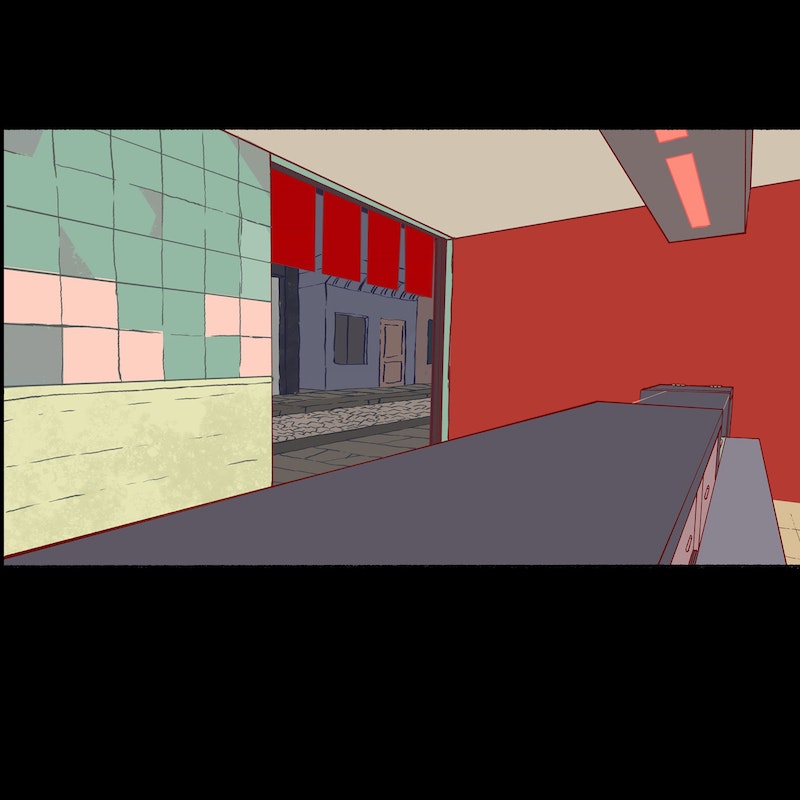 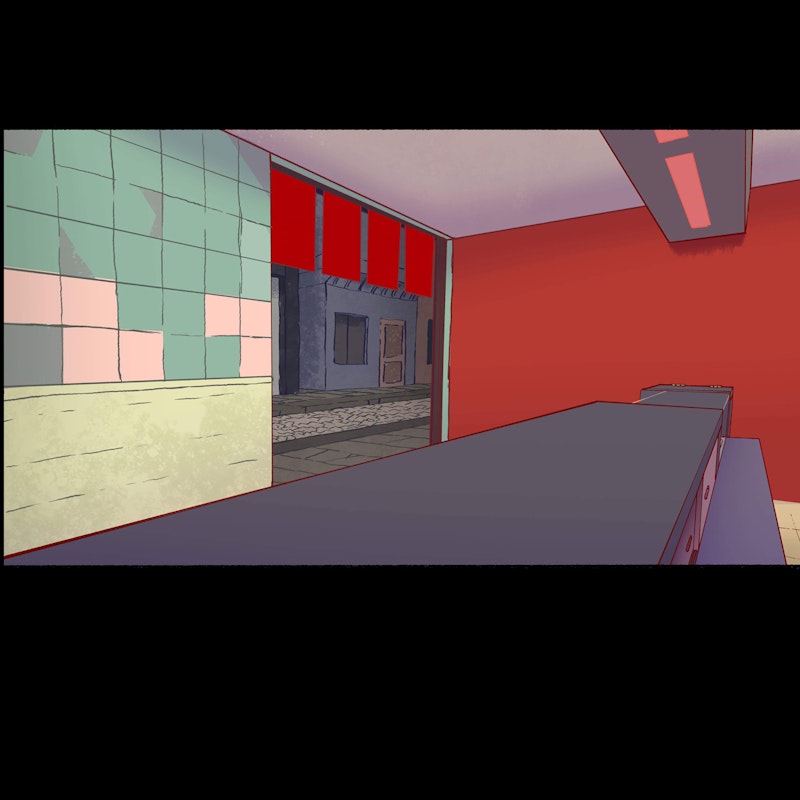 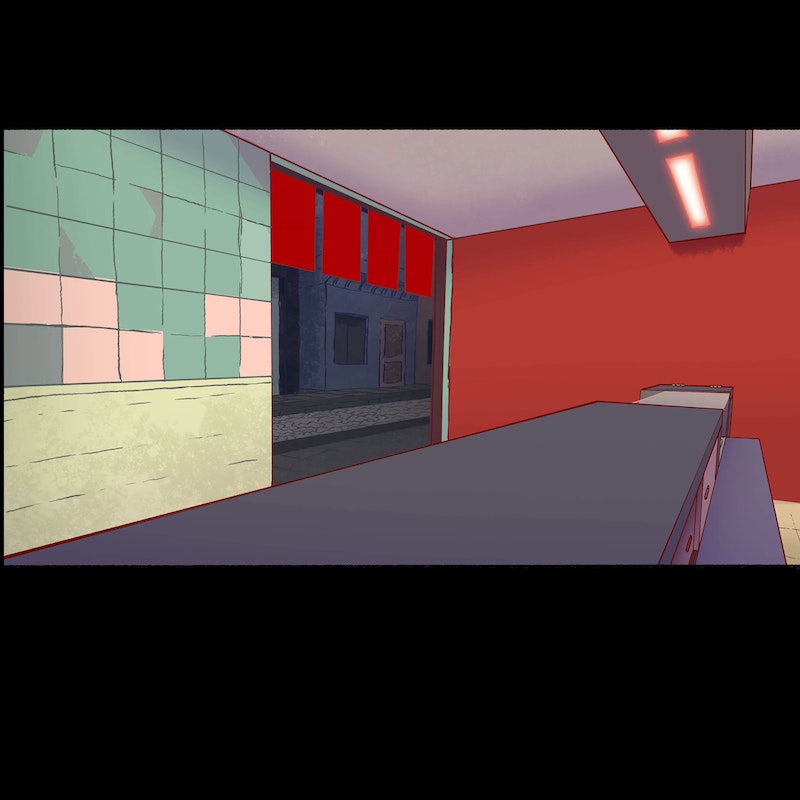 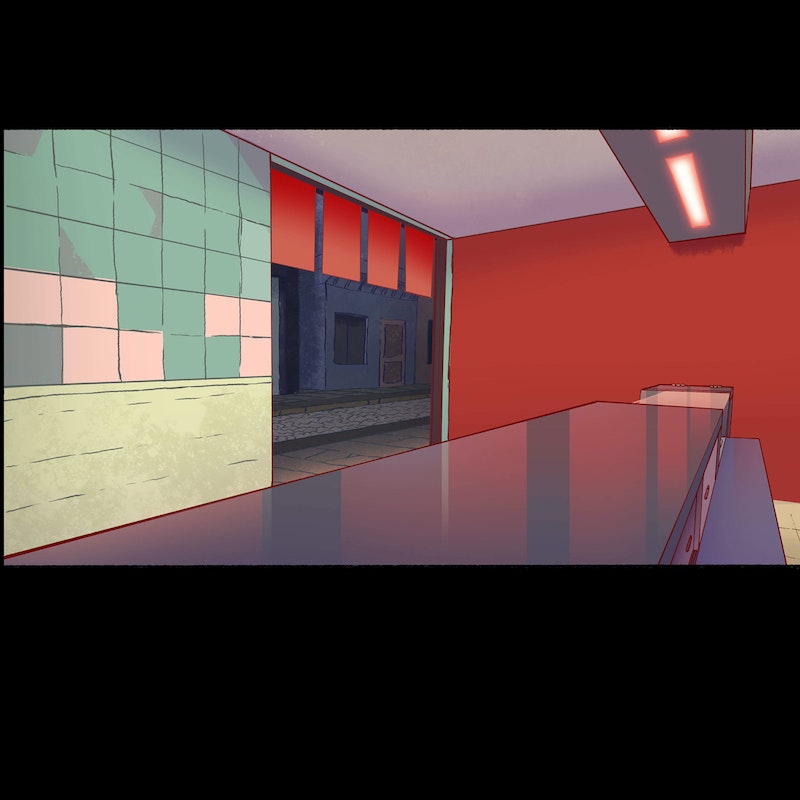 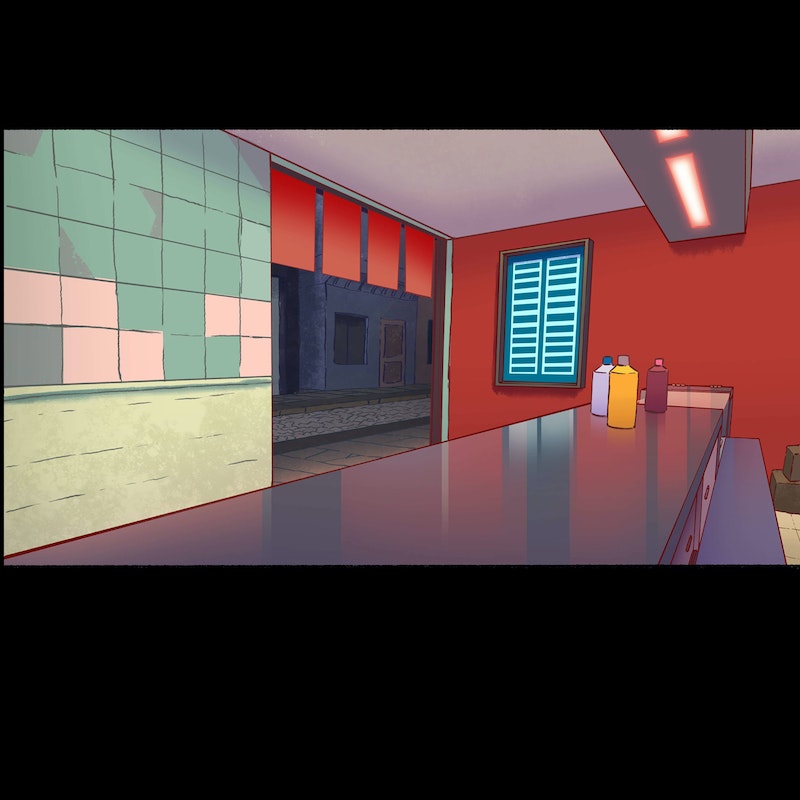 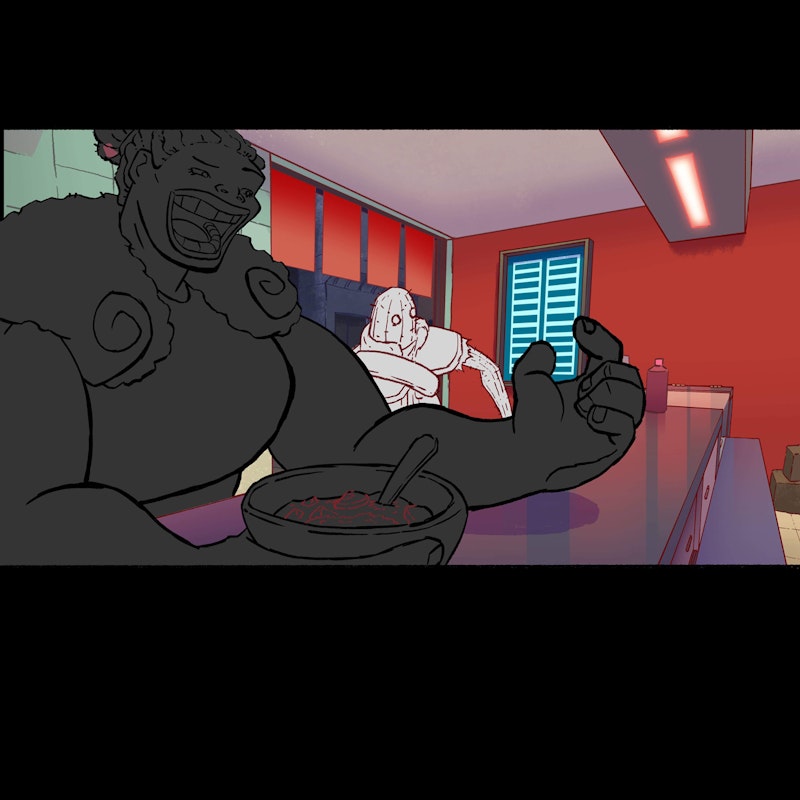 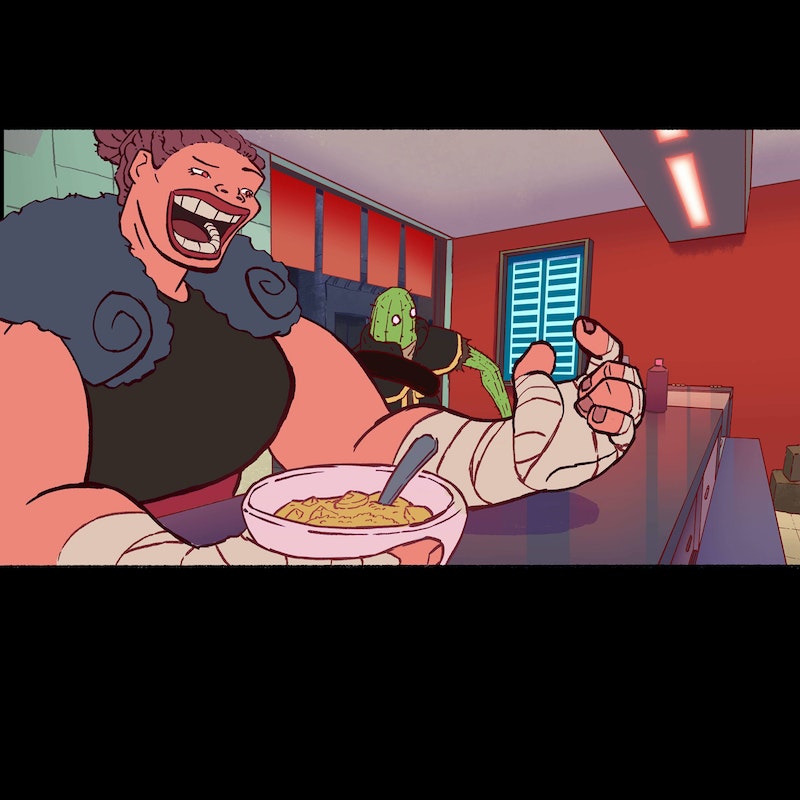 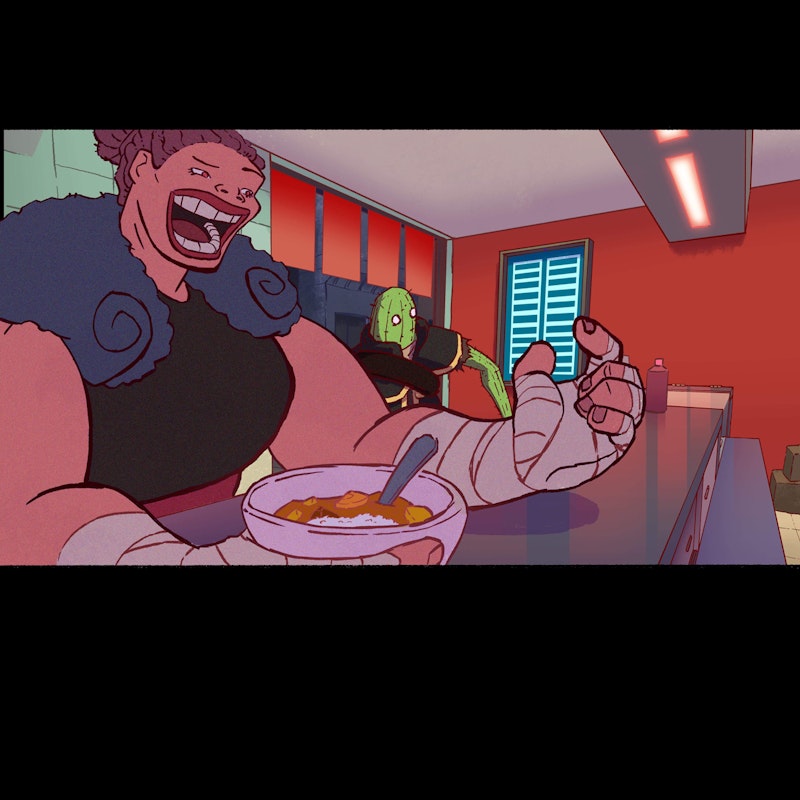 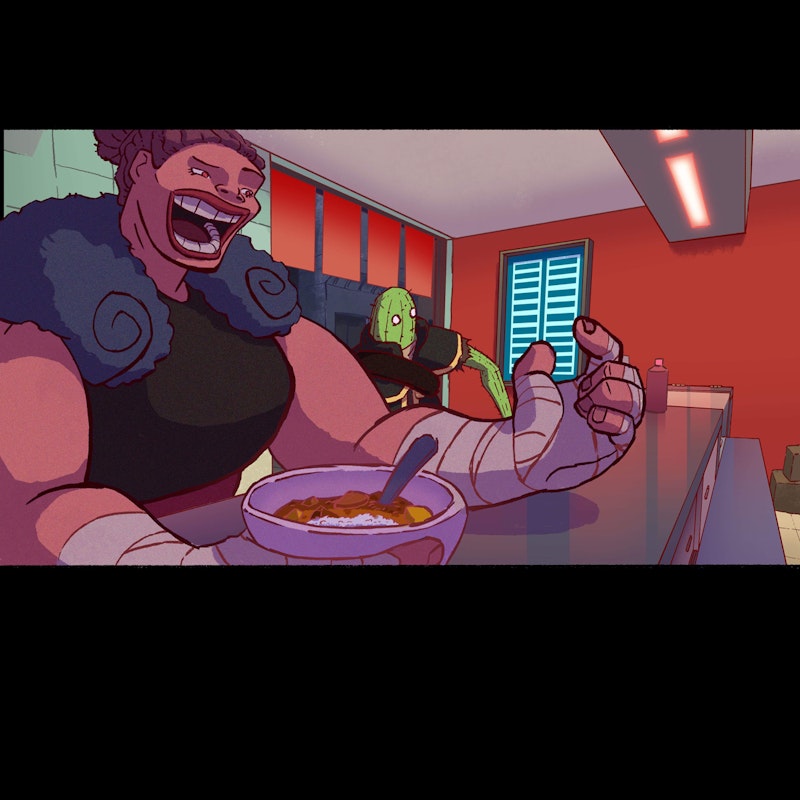 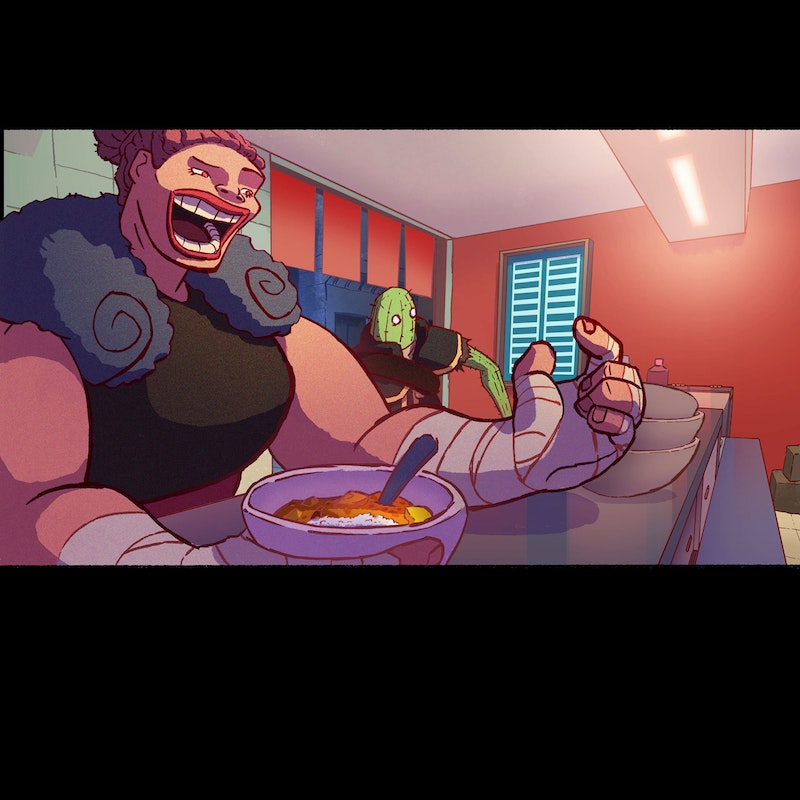 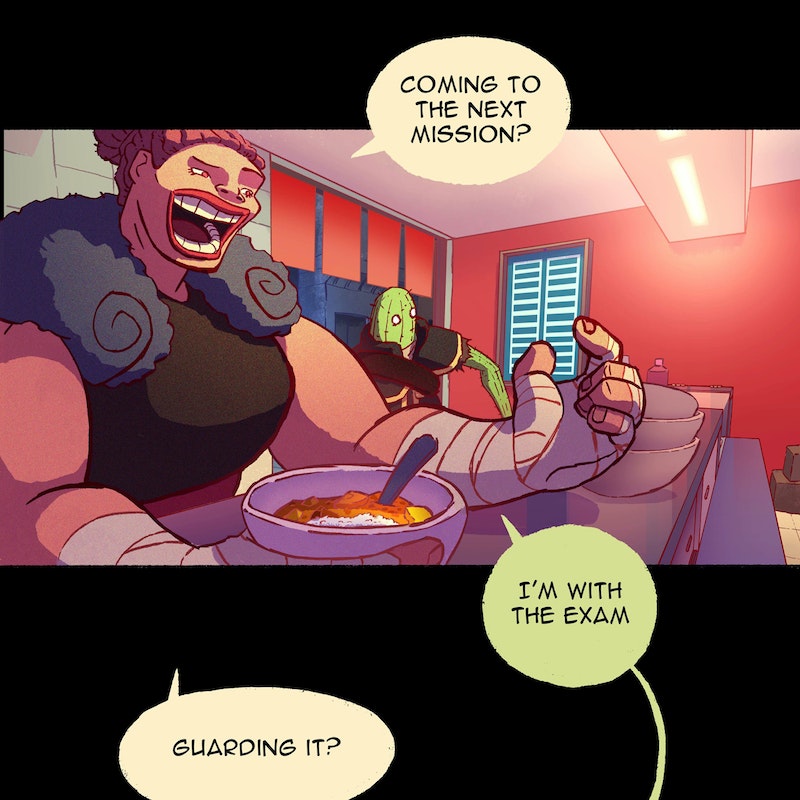 How long does it typically take you to complete everything for a chapter?

This new chapter took me two months, mainly because I didn't have any assets and had to organise and create everything from scratch. I think the new ones will take less time.

Can you tell us a bit more about your inspiration for the story? 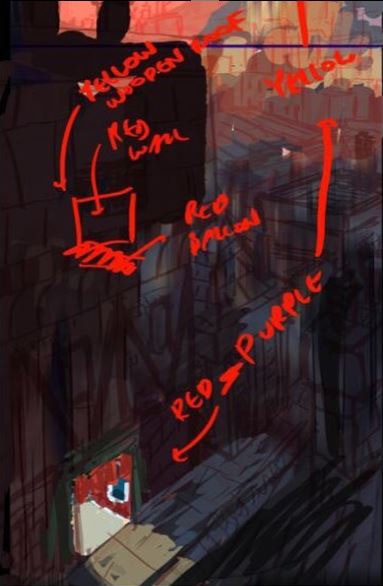 As your webcomic has a narrative that can be influenced by your readers, how do you plan for that? Do you have an overall story arc plotted out or do you write out stories as you go?

What I really like about Horizon Down is the world itself. I know the rough beliefs and flaws of each character and how all of them can show a different side to this world. 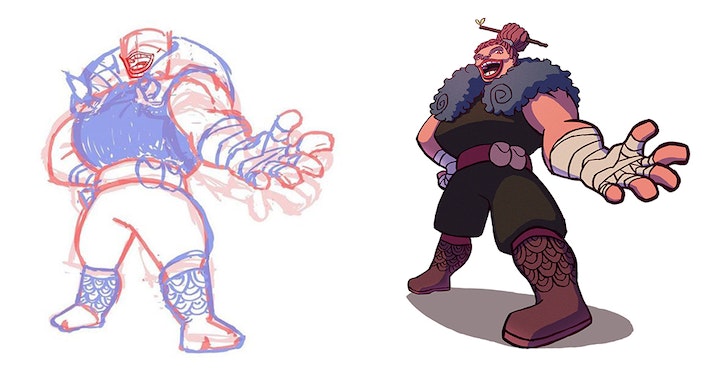 Using the voting mechanism, the audience challenges me to write in more detail the side of the world that shapes the personality of their chosen character. On top of that, I have to find the moments in the life of that particular character that have the most drama and then focus on that for the new chapter.

Therefore, there is no full story, only a world with a challenging environment that pushes some people to go out and explore the unknown. I wanted to make a story that I would like to read so if I already knew the end of the whole story, I would lose the interest. By using the voting system, the protagonist always changes so I never know what's coming next, and that's what keeps this exciting for me. What if the next protagonist's goal is to kill the first one?

Are there any characters of yours that have been particularly fun to draw/write? Any that fans particularly love?

I was scared that people would vote for a character that might have a boring narrative so I made sure all of them had some sort of drama that would be fun to draw. Shawakk was the chosen character by the voters for the latest installment and so far it has been super fun to draw.

How did you decide on your design style for Horizon Down? How do you approach the design of each chapter?

I mainly think about flow and who has the power in the scene. When I'm sure of these, then I start building the compositions, colour and posing. For style, I just keep updating my Pinterest boards and once I make a decision on any element of the comic I just keep up to it. I don't think I can point to a specific influence for this comic. 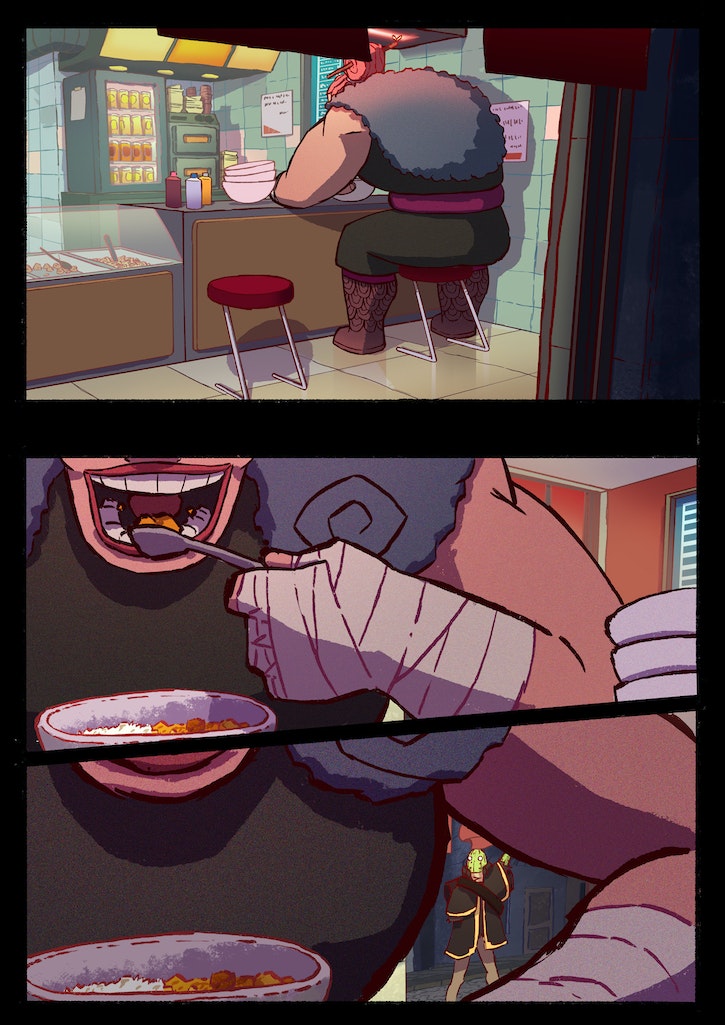 What's the biggest challenge when creating a webcomic like this?

Making a webcomic that, once opened, makes you scroll down to the following panel until you finish it.

What would you say to other artists who want to write/draw original content?

Plan every single detail of your project before starting and make sure it's a realistic goal. After that, finish it!

I recommend having a MASSIVE library of references to start with when you're starting a project like this. And start by basically making a collage of these references.

Like for the first scene of episode 4, I tried as much as possible to make it feel like the express from “Chungking Express” (1994), obviously, I have a long way to go until I reach that level but I guess I'm closer now than before I started this webcomic.

Once this stage is done, I think it's super important to ask for feedback from people you trust at all stages of production. Scheduling and having a super organised overview of the project really helps to see how far in production you are and what kind of working rhythm you should have in the future. For example, it took me 8 days to draw the first page, I knew I didn't want that time average for the rest of the comic so I created assets I could reuse and distributed the detail in a panel in a less time-consuming way, this reduced the average to 3 days.

Now, in the new episode, I've managed to reduce it to 2 days. Then it's just a matter of starting, the more I draw, the quicker I get.

You can read the 4th issue of Horizon Down HERE. And be sure to keep an eye on Pedro's Instagram and on the Horizon Down series for more updates!