The 2017 Oscar nominations are in and we're taking a closer look at the nominated animation shorts in the upcoming awards! 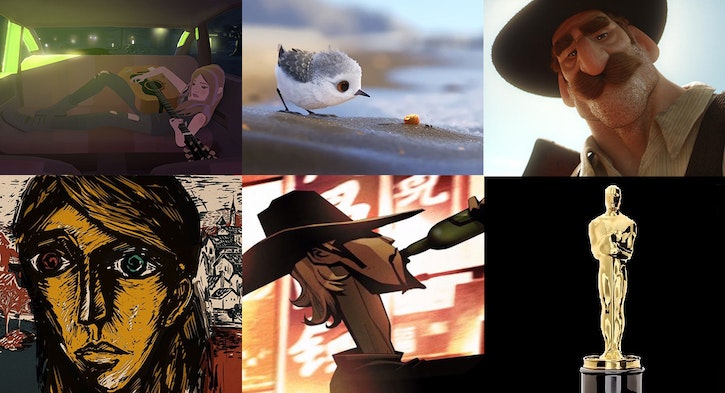 First up, we have Blind Vaysha by filmmaker Theodore Ushev, designed in 3D and also available in 2D, which is based on a philosophical short story by Bulgarian writer Georgi Gospodinov of a young girl born with one eye only able to see the past, and the other only able to see the future. Ushev uses intricate digital linocuts, a mixing of past and present technologies to help evoke this visual divide, a complimentary fit with the short's theme.

Vaysha is not like other young girls; she was born with one green eye and one brown eye. But her odd eyes aren’t the only thing that’s special about her gaze.

Her left eye sees only the past. Her right, only the future. Like a terrible curse, Vaysha’s split vision prevents her from living in the present. Blinded by what was and tormented by what will be, she remains trapped between two irreconcilable temporalities. “Blind Vaysha,” they called her.

Next we have, Borrowed Time directed by Andrew Coats & Lou Hamou-Lhadj, and produced by Amanda Deering Jones. The music was written and performed by Gustavo Santaolalla, composer of The Motorcycle Diaries, Biutiful, and The Last of Us and Best Original Score Academy Award winner for Brokeback Mountain and Babel.

The short created quite a sensation with over 8 million views when it was released online in October and has already garnered a slew of awards.

A weathered Sheriff returns to the remains of an accident he has spent a lifetime trying to forget. With each step forward, the memories come flooding back. Faced with his mistake once again, he must find the strength to carry on.

You can also check out the featurette discussing the origins of the short film below:

Next up is Pear Cider and Cigarettes by animator/graphic novelist Robert Valley and Cara Speller, a Vimeo Original which is available for rental or purchase through Vimeo. The short is narrated from Valley's perspective and is somewhat autobiographical, revolving around the life and early death of his vibrant but self-destructive young friend Techno.

Drink and smoke…that's what Techno Stypes really likes to do, and fight. He was in no condition to fight. He was sick, really sick. His disease had whittled him down to a shadow of his former self. He was crippled from a car accident when he was 17 but that’s not how he lost his big toe. He lost that in a motorbike accident, yeah he was broken alright… what the hell was he fighting for anyway and what was he still doing in China? His father had given me two clear instructions: 1. Get Techno to stop drinking long enough to receive the liver transplant, and 2. Get him back home to Vancouver. This was not going to be easy.

Next up is Pearl, a foray into VR storytelling by Patrick Osborne, and a collaboration with Google for their Spotlight Series.

The short follows a father and daughter as they journey through life in their beloved hatchback and the 360 video feature allows you to view their world from the passenger seat. You can watch this on Youtube and use your mouse to navigate around but you'll want to watch this on a Cardboard VR viewer or Vive headset if you have one.

Set inside their home, a beloved hatchback, Pearl follows a girl and her dad as they crisscross the country chasing their dreams. It’s a story about the gifts we hand down and their power to carry love. And finding grace in the unlikeliest of places.

And lastly, we have Piper, from Alan Barillaro and Marc Sondheimer of Pixar Animation Studios, in which a hungry sandpiper hatchling discovers that finding food without mom’s help isn’t so easy.

The charming short is a visual feast to behold and a remarkable technical achievement.

A mother bird tries to teach her little one how to find food by herself. In the process, she encounters a traumatic experience that she must overcome in order to survive.

So there, you have it! Which one's got your vote?