It's no secret that here at Brown Bag we are very proud of the quality of our artist's work! That's why we were delighted to hear that one of our very own, Matte Painter Gavin O'Donnell, had one of his beautiful artworks selected for feature by ArtStation showcasing their new Canvas Printing facility!

We caught up with Sierra Mon, Marketing Manager at ArtStation and asked her about their canvas printing and what's involved in creating such beautiful prints!

Sierra: Gavin's artwork grabbed our attention with its great storytelling and depth. When we were looking for a piece to use to test the quality of our canvas printing, his was a great choice because it had a good variation of color and light.

We wanted to make sure that our print quality was up to the highest standard so we needed a stunning piece that had that variation so we could capture all the details and colors. 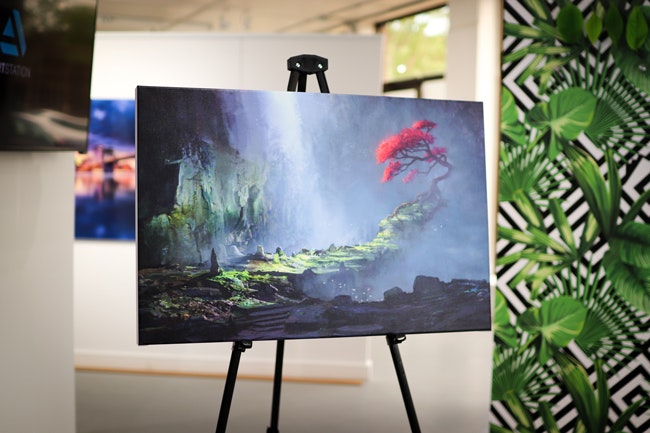 What makes a good piece for this process, composition, style etc?

Sierra: In terms of style or composition, that's entirely subjective. ArtStation has worked hard to make sure that we produce a beautiful and accurate representation of any work. What's important is that the file that is uploaded is very high resolution. Some think our requirements are a little demanding but it's really just so that we can ensure the print is of the highest quality.

We can say though that when it comes to Canvas vs Metal Prints, artworks that have a lot of sharp detail tend to pop more on the HD Metal Prints whereas artworks that are more painterly or illustrative like Gavin's are more suited for canvas. 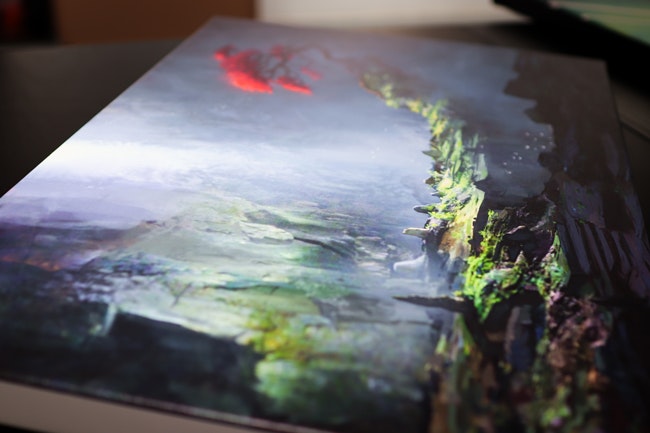 The quality of your prints are really excellent, can you explain the process a little?

Sierra: We researched it for a while and started working on it in early 2019, releasing our MVP in February of that year. Our main goal at that time was first to get the functionality of it working and we worked with a print supplier.

We focused at first on making it super simple so that the only thing and artist would have to do is upload their artwork, and then they didn't have to worry about the rest. Shortly after it stabilized, we decided to move the prints facility in-house so that we can have a lot more control over the production and shipping quality. The quality of ArtStation prints is difficult to find anywhere else so we're delighted to be able to make those available to the ArtStation community.

Where is it possible to avail of ArtStation's Canvas Prints?

Sierra: The Art Prints and Art Posters are available worldwide. We're currently exploring solutions for being able to offer the Canvas Prints and HD Metal Prints to Europe at reasonable shipping costs for our audience. 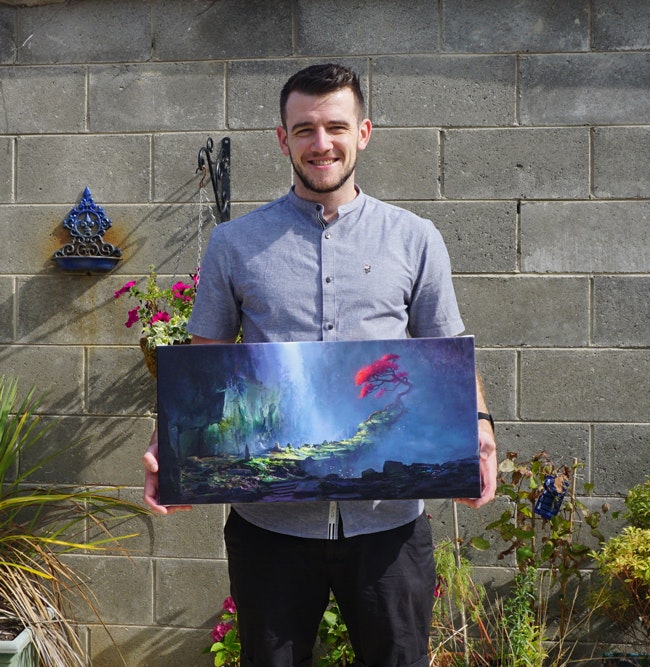 We also caught up with Gavin to see what his thoughts were on his work being featured in such a prestigious way!

Gavin: Well, first of all, I couldn't believe they wanted to use one of my earlier pieces that I created 6 years ago and second to be even considered on this worldwide stage showcasing the best artists in the world is a massive honour. This is when the impostor syndrome starts kicking in!

The canvas looked amazing! I've tried getting my work printed in a few different places in the last few years but nothing compared to the quality of this.

What is the story behind the piece?

Back when I was painting this piece, I had just taken a Gumroad tutorial from Eytan Zana and I was trying to apply what I learned.

I was also taking part in a daily painting group on Facebook. In this group, there were daily topics and you had to try and create something in 30 minutes or less. One of the topics that day was 'Tree Battery'. So I did up a fairly loose sketch of a red tree in a cave. I ended up liking the idea and pushing it further.

The idea behind the piece is that the tree has some kind of ancient mystical power. I left the rest of the story pretty open, it would be up to the viewer to make up something from there.

Can you tell us a little about your process for this piece?

When I was making this piece, I had my very rough 30-minute sketch as a jumping-off point. I then started to research and gather images for a couple of hours - this would help the development of the image. I gathered all these images into one file called a moodboard.

When I had a clear idea I then started painting the image up, I also used some photo textures around the image mixed with painting. This technique is known as photobashing. Think of this like making a collage traditionally. The huge advantage with Photoshop over traditional is these texture can be easily manipulated. However, when using these photo textures they might not always be in the right perspective, scale, value or colour so these are things the artist needs to be mindful of when choosing what to use.

I was fairly slow and still learning back then so it took a good while to complete, I spent around 3 weeks working on this. I was also attending a critique group which unfortunately isn't around anymore. We'd meet up once a month in the evening in Digit Games and all the artists would bring what they were working on. We'd try to help and guide each other to make stronger images.

I was lucky to have some amazing artists giving me guidance on this piece such as Denman Rooke who now works as the Lead Concept Artist at Romero Games. I learned a ton from Denman in the early stages of my development.

You can check out more of Gavin's amazing work here on his ArtStation page!