From our Christmas Movies to Holiday Specials, we've got a go-to guide for you to find out where you can cozy up with our very favourite friends!

Take a look, add to your holiday watchlist, and get ready to settle in for some festive fun: 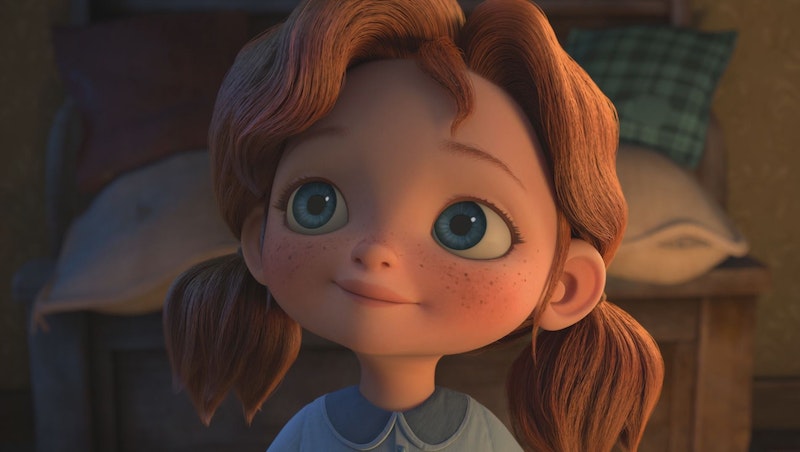 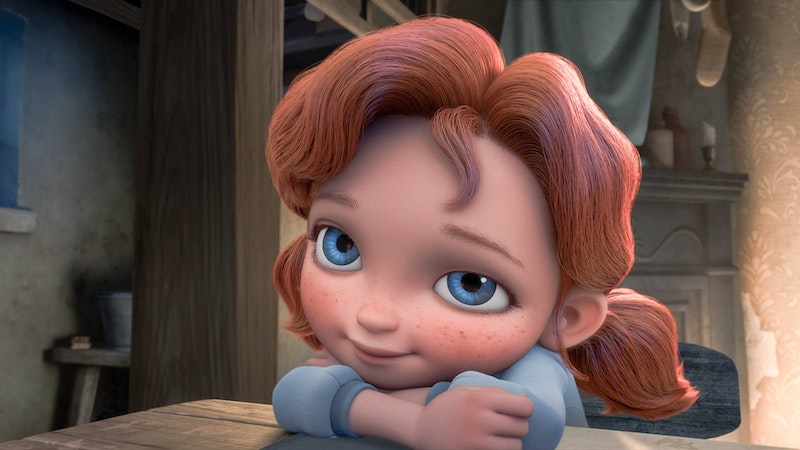 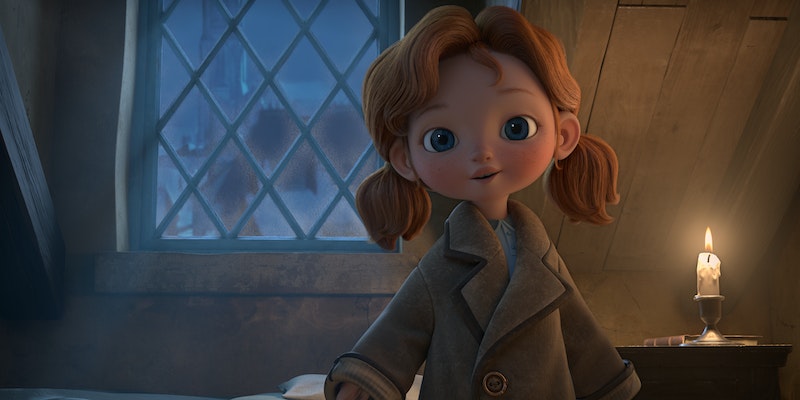 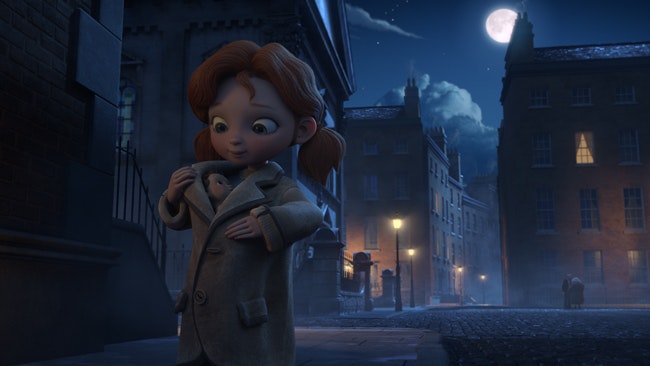 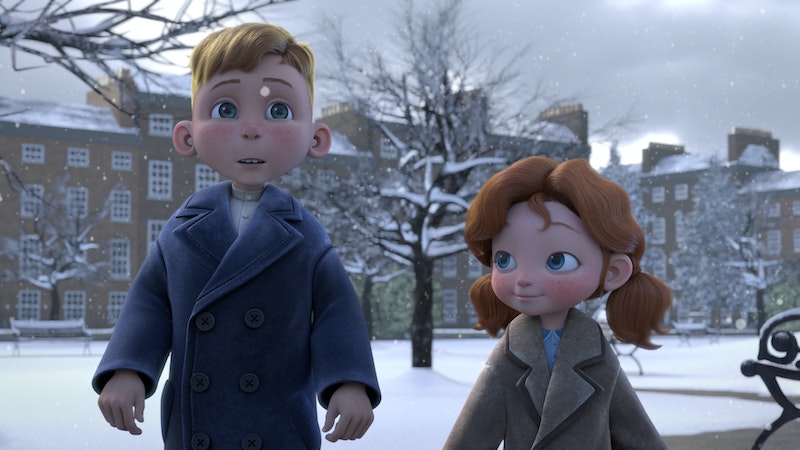 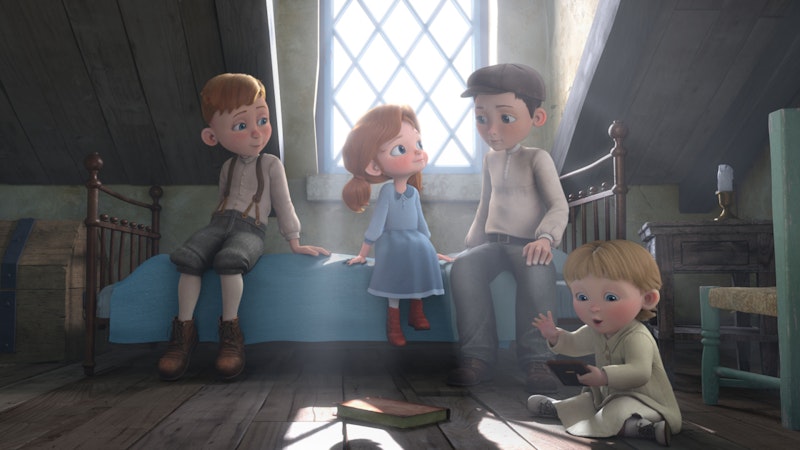 Get ready to snuggle up with our favourite little mischief maker this Christmas season with two charming short films that you can watch back-to-back!

Set in Ireland in the 1910s, the award-winning 'Angela's Christmas' is a funny, heart-warming and poignant story about the power of family and the innocent desire of a child to ensure everyone is safe, warm and loved at Christmas time.

'Angela’s Christmas 2' is a heart-warming tale of a determined little girl who sets out to reunite her family in time for Christmas. Based on the characters from Pulitzer Prize-winning author Frank McCourt, it is a tender and funny story about the importance of family and togetherness. 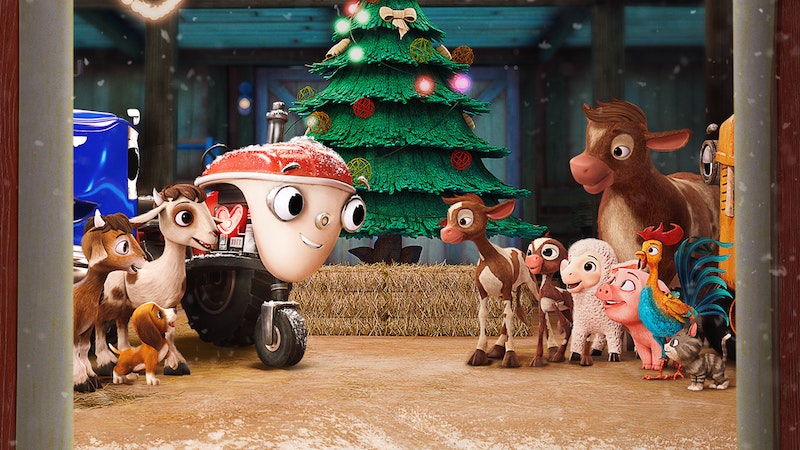 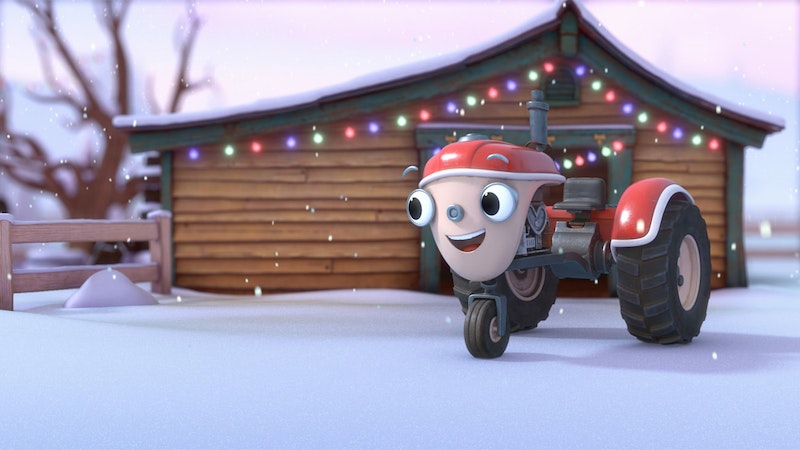 In “A Winter’s Cow Tale,” it’s Christmas Day and Daisy the calf’s mom Rosalie is due to have her baby. Daisy can’t wait to be a big sister, but she’s disappointed when she can’t decorate the tree with her mama. Otis rolls into action to help Daisy decorate the tree and when the snow builds up too high, he plows his way through the snow, so Daisy can meet her new baby sister. 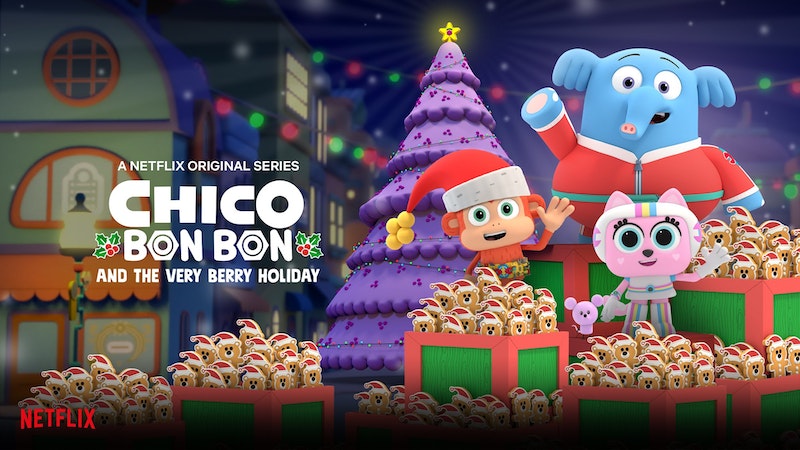 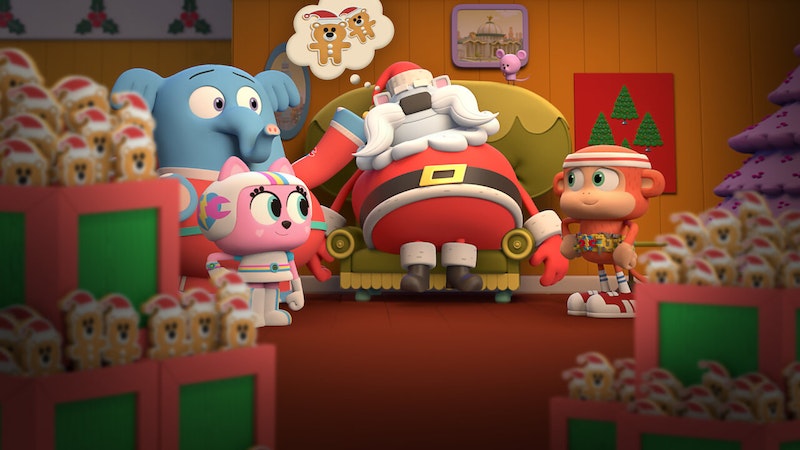 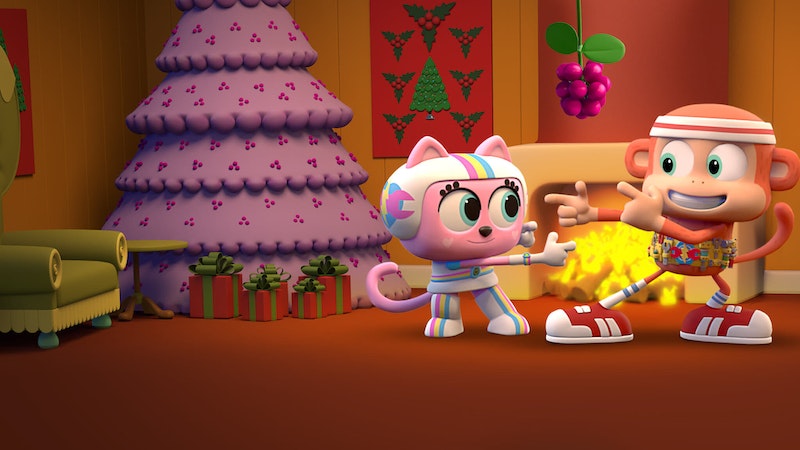 Have yourself a Merry Blunderberry Day and get ready for some Fix-It Force fun! Grab your Blunderberry cakes as you watch Chico and the gang swoop in to save the day in Blunderburg with their awesome problem-solving skills.

In this 'Chico Bon Bon: Monkey with a Tool Belt' special, the Fix-It Force makes a plan to hit every home as fast as they can, delivering Blunderberry Cakes before the town awakes to avoid a holiday disaster.

You can also watch this special on the Netflix Jr. YouTube channel: Chico Bon Bon and the Very Berry Holiday 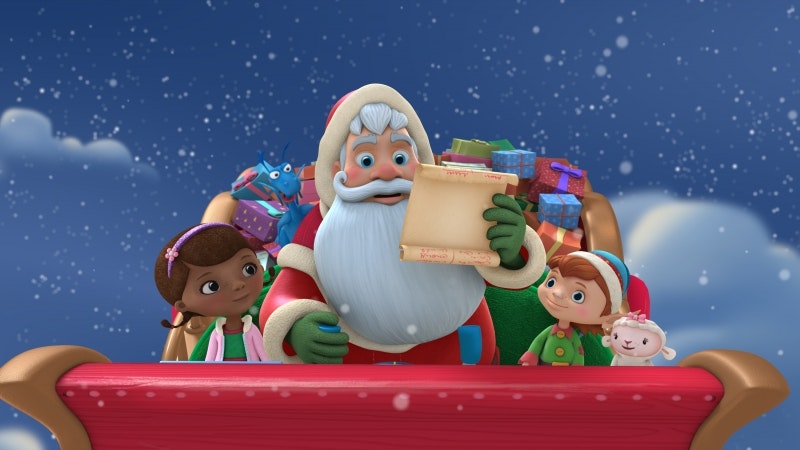 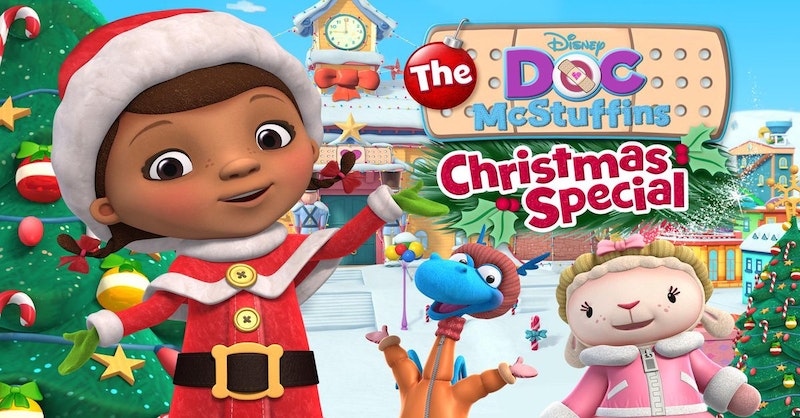 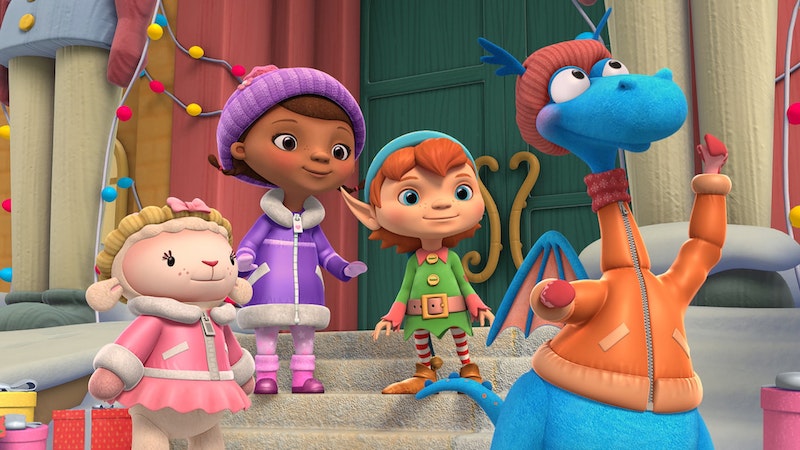 In this special Doc McStuffins episode (season 2 episode 11), Doc and the gang travel to the Santa's workshop in the North Pole.

Now available to stream on Disney NOW or Disney+. You can also watch this special on the Disney Junior YouTube channel: Part 1 & Part 2

In this special Doc McStuffins episode (season 5 episode 3), when there are no presents under the tree, Doc suspects there's something wrong at the North Pole and time travels to figure out what went wrong and save Christmas!

Now available to stream on Disney NOW or Disney+ 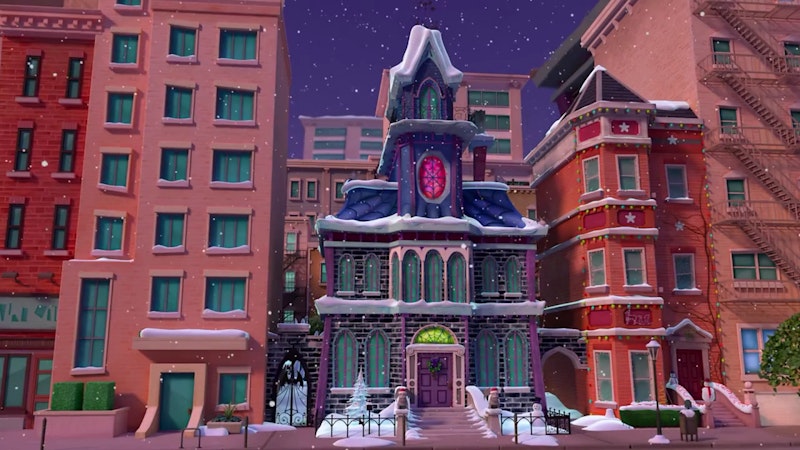 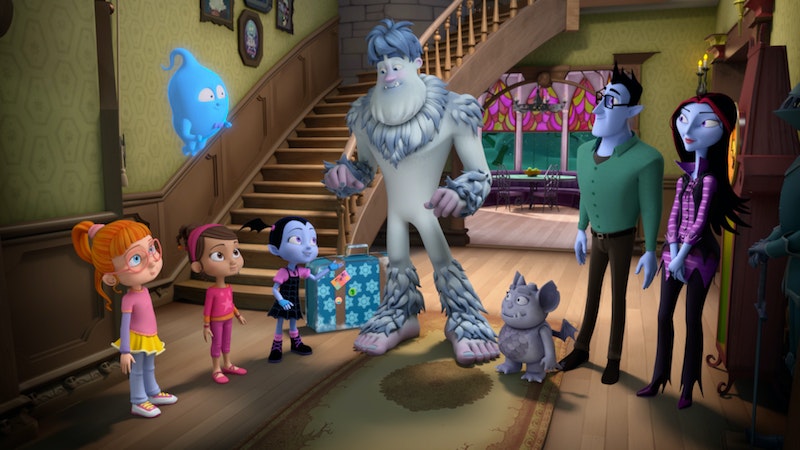 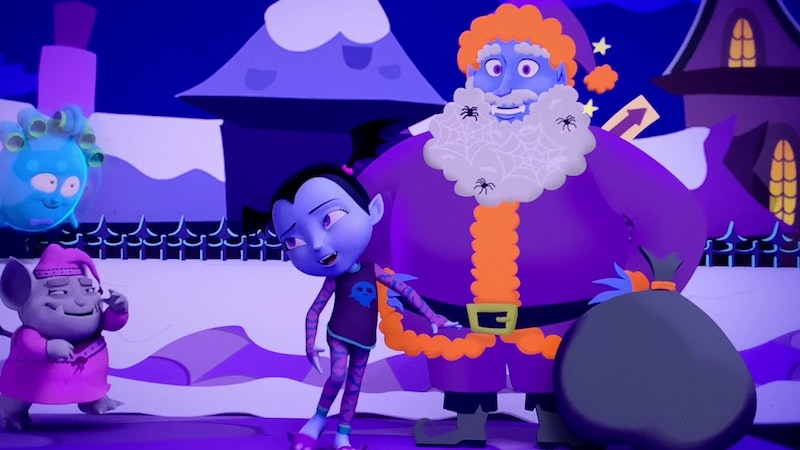 In this seasonal Vampirina episode (season 2, episode 21), Vee and family embrace the human ways of Christmas but Gregoria feels differently.

In this seasonal Vampirina double episode (season 3, episode 17), Vampirina plans a Spooky scare in the hopes of attracting Spooky Clause so that her family can enjoy a festive Transylvanian Christmas in “The Fright Before Christmas”. And in “Scared Snowman”, when the Abominable Snowman arrives at Scare B&B after a big snowstorm, Vee and her friends help him overcome some of his fears and discover that he's much braver than he imagined.

Now available to stream on Disney+ 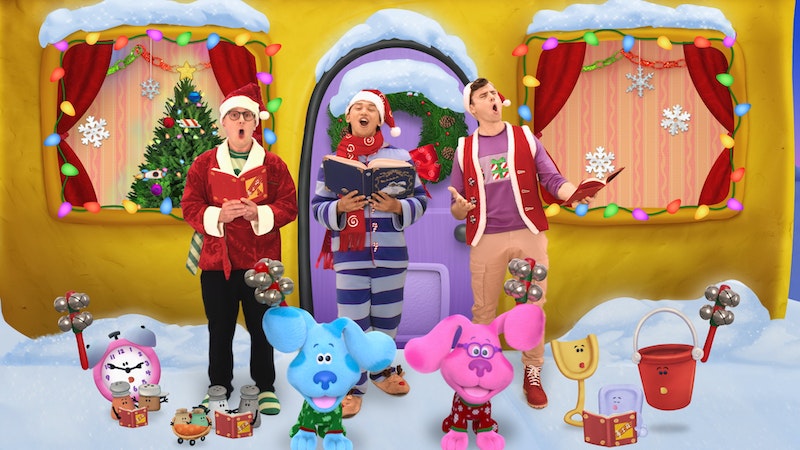 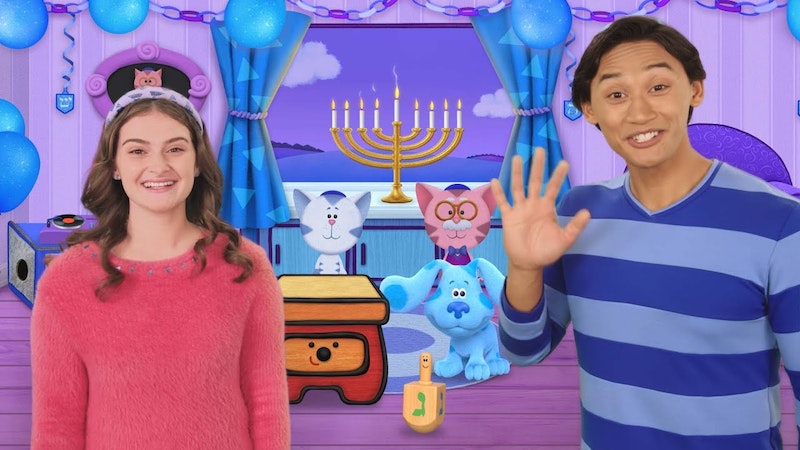 In this winter wonderland special event, it's the night before Christmas and there's lots of fun Holiday activities and even some special guests!

In “Blue’s Night Before Christmas”, Josh and Blue play Blue’s Clues to figure out what Blue wants for Christmas, decorate with Steve, help Joe wrap presents, and celebrate a night full of holiday traditions.

You can watch this special on the Blue's Clues & You! YouTube channel: Blue's Night Before Christmas

There are SNOW many great things to do on a snowy day like today, but Blue's surprise may be the very best!

Josh and Blue play a wintry game of Blue's Clues to figure out what her surprise is; along the way, they make shapes in the snow with their friends and sing a snow day song with Mo Snow. This special episode features guest Leslie Odom Jr. as “Mo Snow”. 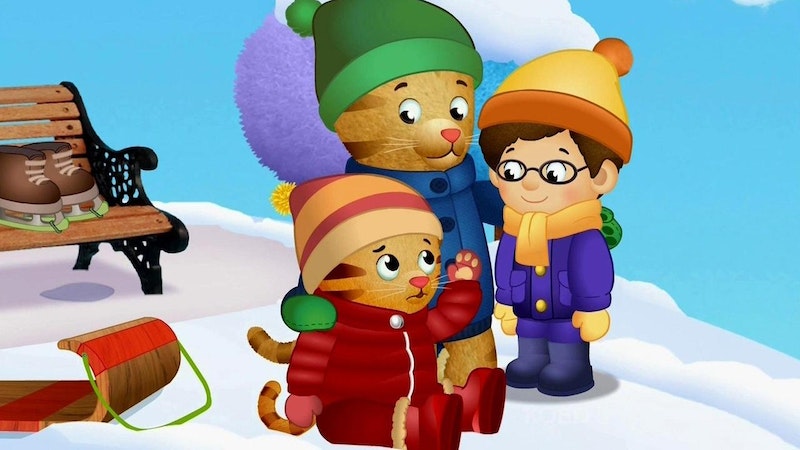 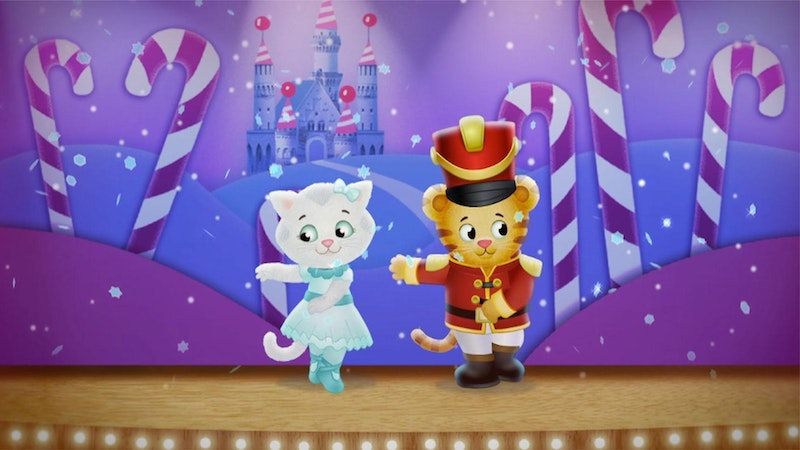 Daniel's Winter Adventure: Daniel, Dad, Prince Wednesday and Prince Tuesday are all going sledding! But once they get to the hill and see how tall it is, Daniel and Prince Wednesday get scared. Dad assures them that if they try it a little bit at a time, they might surprise themselves and have a great time. Later, Daniel goes ice skating for the first time. When he tries it a little bit at a time, he realizes it is not so hard.

Neighborhood Nutcracker: Daniel is going to see a show called The Nutcracker Ballet! Once he arrives at the performance, he finds out that Prince Wednesday is sick and needs Daniel to fill in for him and dance on stage. Daniel is reluctant at first but realizes that if he learns the steps a little bit at a time, he can dance the Nutcracker and the show will go on!

You can also watch this special on the Daniel Tiger's Neighborhood YouTube channel: Part 1 & Part 2

It's snowing in the Neighborhood! Miss Elaina is coming over to Daniel's house to play in the snow. When it's time to go outside, Mom Tiger helps Daniel change out of his pajamas into clothes that will keep him warm and he learns how important it is to choose the proper clothes. 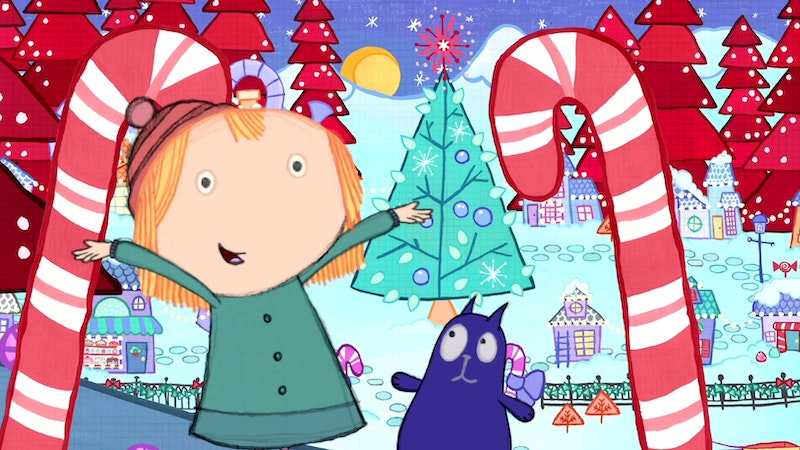 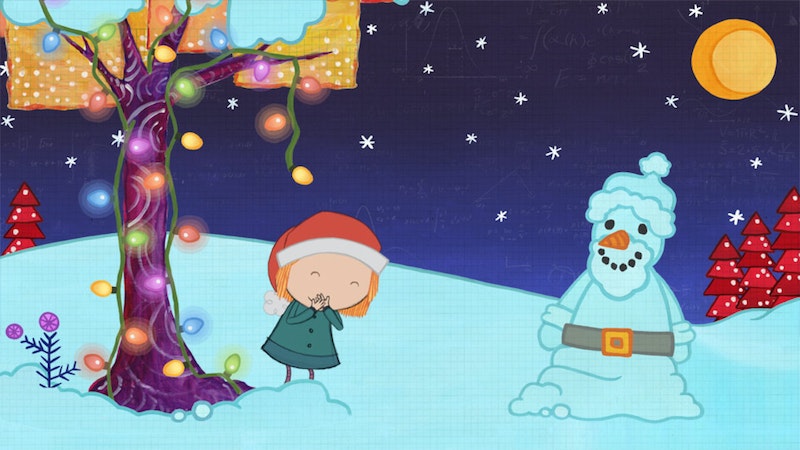 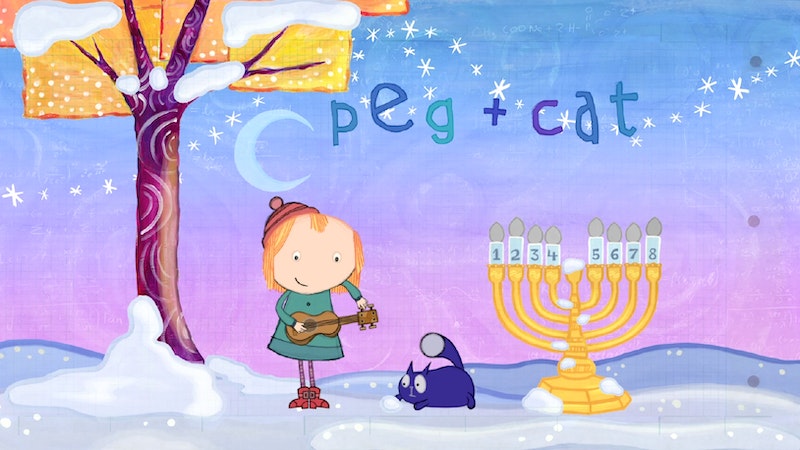 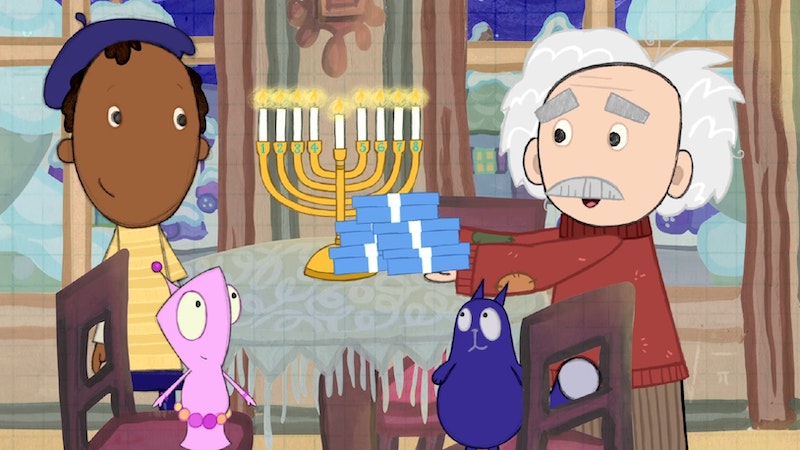 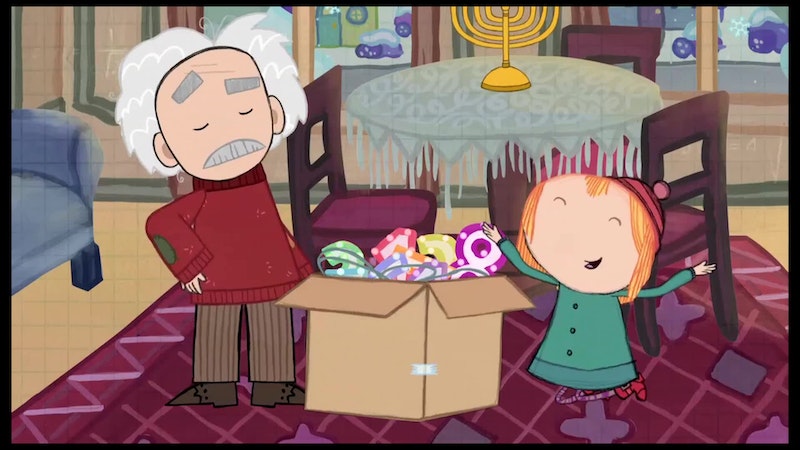 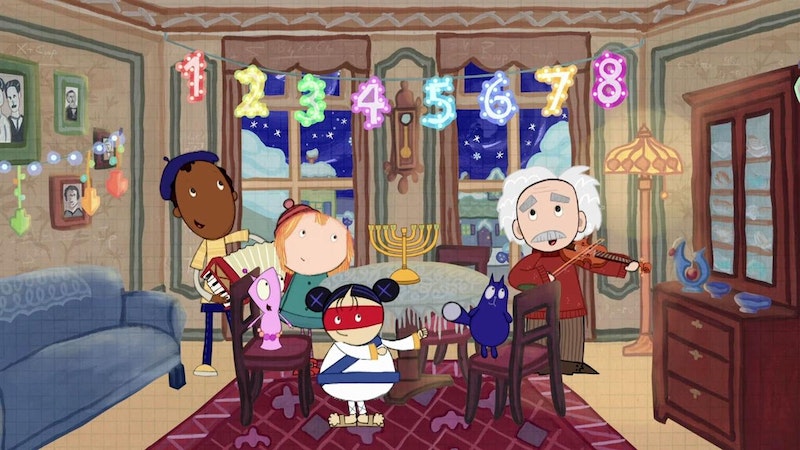 When Santa Claus is in trouble, Peg and Cat have to solve their biggest problem ever: how to make and wrap presents for all the children of the world, and then deliver them using 100 sleighs.

When Albert Einstein invites Peg and Cat over for Hanukkah, he shows them how to make a 2D piece of paper into a 3D dreidel. Later, they need to use this process to bring peace to Al’s home and save his Hanukkah. 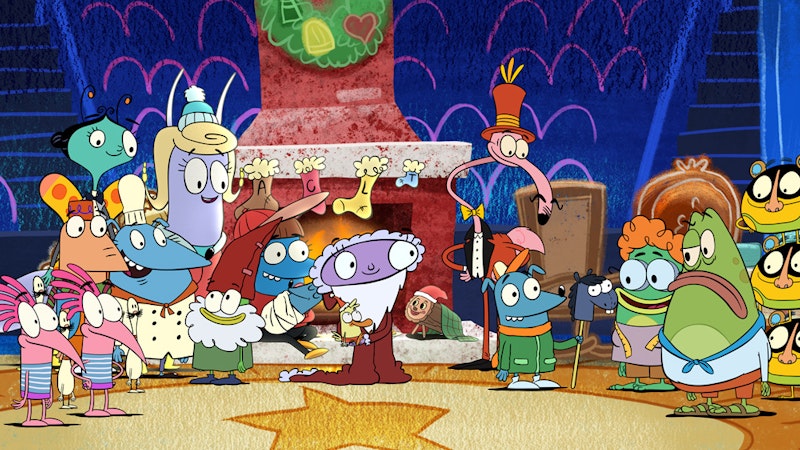 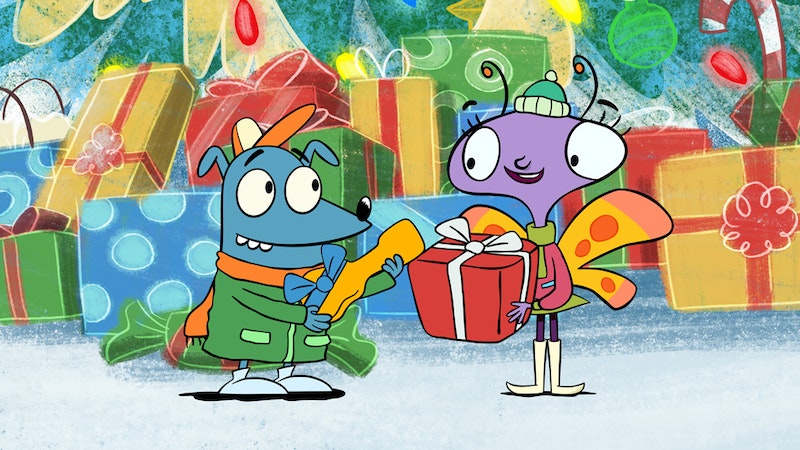 When the Circo gets stranded in Antarctica on Christmas Eve, Carmen enlists Luna and the kids to play Santa and save Christmas for an unbelievably cute stowaway duckling named Lil’ Teeny.

In this holiday special kids and families get to learn about Christmas traditions around the world, including the many variations on Santa.

Now available to rent or buy on Amazon

You can also watch this special on the Let's Go Luna! YouTube channel: Luna's Christmas Around the World Holiday Special 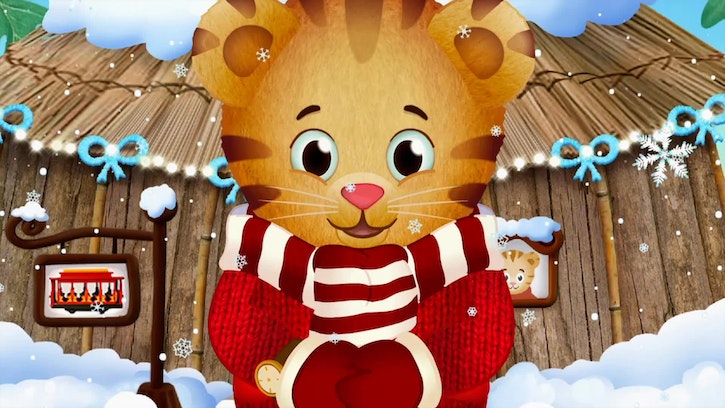 And before you go, you can also watch a selection of our holiday-themed episodes and shorts available online in our Winter Wonderland playlist!