◄
Previous:
Peter Rabbit Fanmail #Sketch
Next:
Galway Film Fleadh Screening An Ode To Love and The Story Will Be Revealed in the Movie!
►

We'll be releasing our short film 'Bird Food' on our YouTube Channel this Friday! So, we thought as a prelude it'd be great to go behind-the-scenes and chat to Bird Food writer and director Richard Keane to see what inspired the short and what was involved in taking the idea from script to screen. 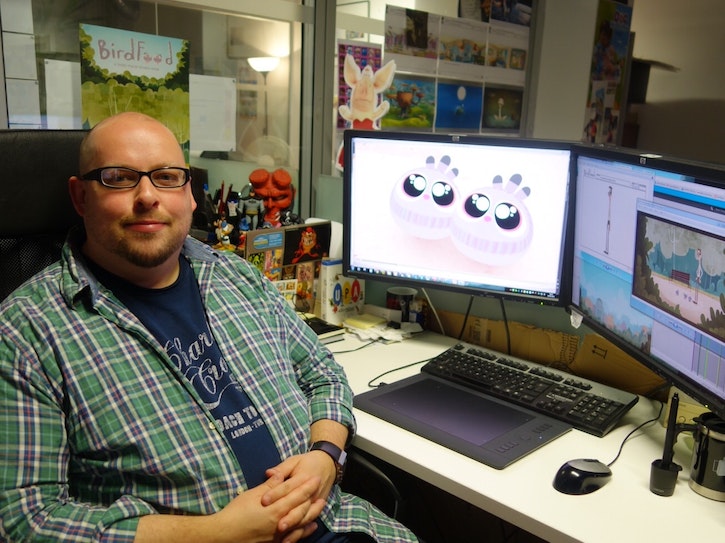 Like most kids, I grew up watching Looney Tunes animations. I might have been different to most though as I used to watch them and pretty much nothing else, even into my teens! So, when I decided to make my first short animated film, I knew it had to have both the visual style and tone of these classics – or as close as I could get.

I wanted to create a 3D short that looked like it was 2D by using old techniques with new technology. Utilising the advantages of 3D production while using the sensibilities of 2D visual storytelling to make the pipeline more efficient.

What are the stages involved in bringing a concept like Bird Food to the screen?

As with every film, story is key! After lots of brainstorming, I eventually came up with a story that I was happy with, to submit to Brown Bag Films. Thankfully they liked it and my colleague Laura Roche agreed to produce it. We submitted it to the Irish Film Board’s Short Shorts funding scheme and luckily we got the green light. Then the hard work really began.

We got a great storyboard artist, Andy Kelly, to do the boards using the script as his guide and then I edited them into an animatic. This is where the film first came to life and we worked very hard on this for several months revising storyboard panels and re-editing until we were completely happy with the flow of the film.

While the storyboarding was happening, we started modelling and rigging the main characters, props and built the 2 sets needed. We used the actions in the animatic to tell us how the characters and sets needed to function so they could be designed efficiently for our needs.

Once the animatic and assets were complete, we started to block out each of the shots in 3D. This involved placing the characters into the set and staging them along with the camera to match the animatic. These blocking files were then sent to our incredible animation team who were made up of Brown Bag Films animators and also animators from around the world who I had previously worked with. They worked their magic and sent through rough animations for me to approve of the general movement and timing and then once it all worked well, they would move onto doing a polish pass to make the animation look as good as it does. 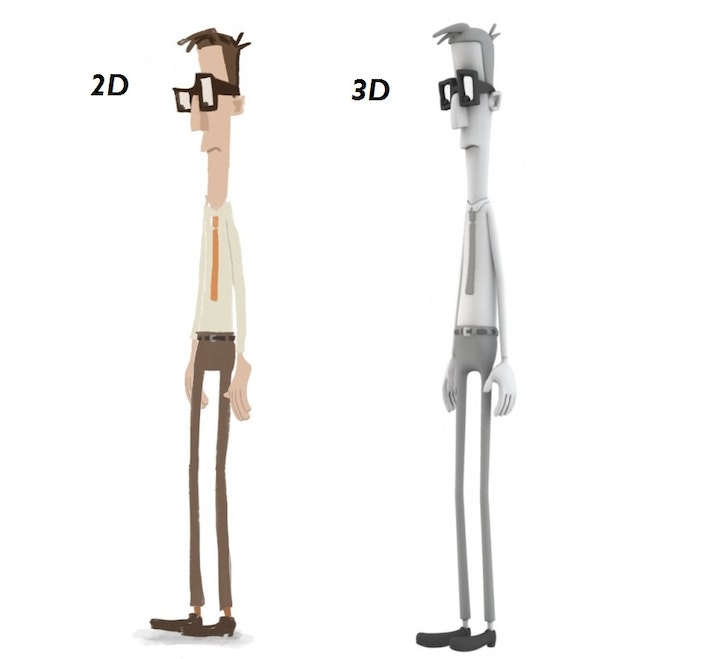 While the animation was being done, we finalised the textures on all of the assets, so everything was ready to be rendered once approved. There was no lights used in the setups as every texture was self-illuminated, so they didn’t need lights to be seen in the render. This meant that the entire short was rendered and composited in around a week.

Finally, we had Darren Hendley compose the amazing music and Dominic Lawrence did an unbelievable job on the sound design and final sound mix.

We premiered Bird Food at the Galway Film Fleadh in 2012 and it has since been shown in over 40 festivals around the world! 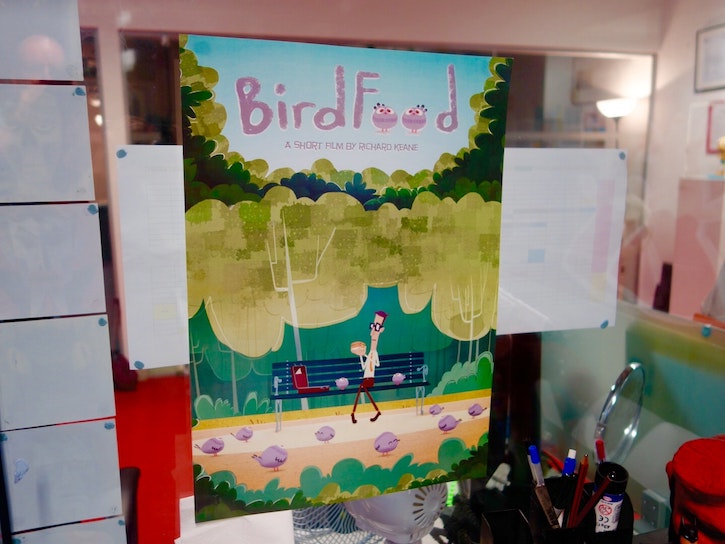 How long did the development of Bird Food take?

I had a draft done way back in 2008 and then for the next 3 years I had it playing in the back of my mind working out story elements etc. while I was busy full-time in Brown Bag Films. I studied and performed improv over those years also and this helped greatly with understanding story, characters, use of props and general timings. I brought all of these elements together until I was happy to pitch it in 2011. The biggest thing over these years was how I simplified the story and how that actually made it better. I removed elements that hindered production and that improved the story greatly.

What were the biggest challenges involved in making Bird Food?

The biggest thing was getting it off the ground in the first place. It is a lot of work to complete a short film and I could not have realistically done it without getting funding for it and therefore being able to pay people to work on it. Once the ball started to roll though, it couldn’t be stopped and a deadline is always one of the best things an artist/creative person can have.

The other big thing was making sure the technique would work. I was pretty confident it would through my experiences in the industry but we were trying something new and so there were always some seeds of doubt. But there were audible sighs of relief when the first renders came through and it looked even better than we had hoped for.

At the same time of our production we heard that Disney were producing their short film “Paperman”, which was also using a 2D/CG hybrid style. Obviously this was worrying at the start, as you always want to be doing something original but I was relieved once I found out their technique, style and story were completely different to ours. 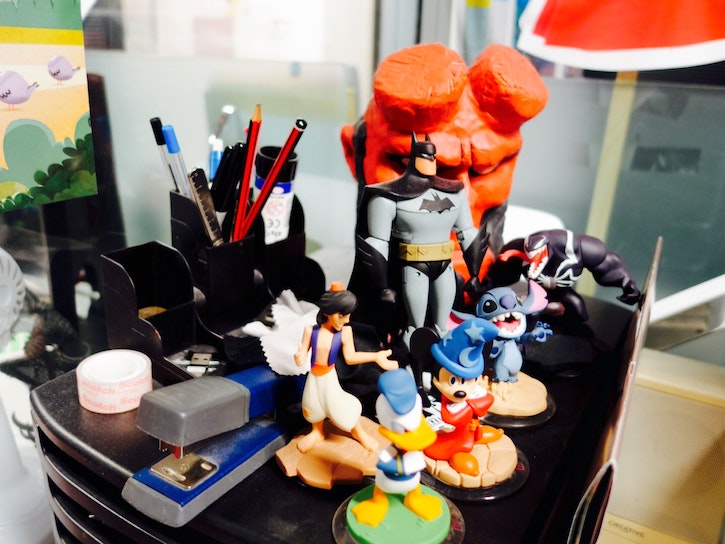 There is a lot of freedom in short films. The stories can be a one-off and don’t need to be episodic like TV series do. New styles and techniques can be tried out and if successful they could be used in future TV series or even feature films. Short films are also brilliant training grounds, not just for new directors but also for all other roles in the production. It is a place where people can get a chance to work in different or more senior roles in the pipeline and prove they can do the job in a full-time capacity. A short film gives the invaluable experience of seeing something all the way through production from start to end but in a much quicker turnaround than a TV series. So mistakes can be made and lessons can be learned much faster and all the positives can be utilised when moving into TV series or features.

What advice would you give to first time short animation directors?

They have grand ideas but don’t know how much work is involved. A great 2-4 minute short film is always much better than an okay medium or long short film. Try and limit yourself in time but always be creative. Try and tell a story in one location with one or two characters. This will be a brilliant training ground for the future.

Also, keep it simple with techniques. Giving your characters hair/fur, adding water FX etc. may, when done well, look great but if you don’t have the time, experience or budget to do them properly I would recommend to stay well away until you do. The R&D time and then render times alone should have you running for the hills.

The other big thing though is to MAKE IT! It is no good to you or anyone else if it’s in your head, so by whatever means necessary, just get up and do it! 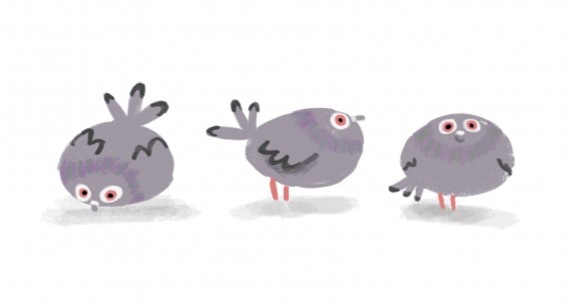 Check out the trailer for Bird Food below: