The 16th Annual ACTRA Award nominations were announced this Friday and we are thrilled to share that the incredibly talented and hilarious Cory Doran has been nominated in the category for Outstanding Performance – Voice, for his portrayal of Donnie Dewayne in 3 Amigonauts. Other Nominees in the category include David Berni — Hector in Cloudy with a Chance of Meatballs, “Inventor Code” (DHX Media), Saara Chaudry — Parvana in The Breadwinner (Aircraft Pictures), Colin Doyle — Bill in Fangbone”, “The Bill of Magic” (Radical Sheep Productions) and Carter Hayden — Klaus in Hotel Transylvania, “Becoming Klaus” (Nelvana Limited). 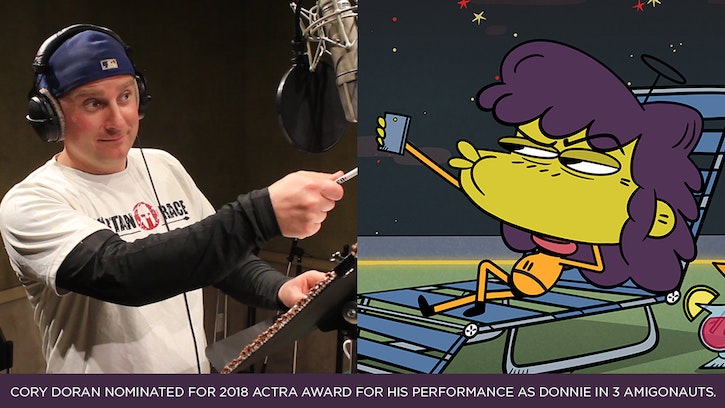 Cory did an amazing job depicting Donnie, the insecure, scheming and hyper driven frenemy of the Amigonauts! We absolutely love working with Cory, and who can forget his hilarious performance as the fun loving and furry Fungus, in Numb Chucks. He is a true pro, and industry gem!

Check out some hilarious behind the scenes footage of Cory in action, at a 3 Amigonauts’ voice record that took place last year at Toronto’s Wanted Sound & Picture Studio.

The ACTRA Awards in Toronto will take place at The Carlu on Saturday, February 24, 2018.